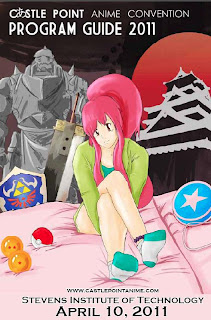 Ed. Note: My bad! Here's the (very late) Castle Point report — the lateness is all my fault, not Ink's!

Castle Point Anime Convention (CPAC) at the Stevens Institute of Technology in Hoboken was the first anime con I ever attended in my home-state of good ol’ Nieu Joisy (and perhaps the second con I ever went to outside of my first Otakon). It was also where I first met Evan Minto of Ani-Gamers fame, who launched me into this high-profile world of aniblogging. While it remains a small, one-day con, the 2011 incarnation of CPAC has experienced very clear growth as seen via its inter-building pathway traffic and increased panel attendance.

This year promised a decent selection of panels, which I generally look forward to most at any con. Spread out between 3 rooms, there was always some title of interest with which to whittle away the span of the con via one- to two-hour sessions. Immediately, however, the first panel I was looking forward to, “Otaku on a Budget,” was cancelled. CPAC staff was on the proverbial ball and made sure audiences didn’t wait around in false hope, but this event ended up foreshadowing my overall panel experience.


The substitute first panel – “Lost in Adaptation,” which addressed inter-medium inadequacies – was lacking in anime examples and focused instead on video games. This was fine given the inclusive nature of anime cons as well as the highly transitory nature of the videogame medium, but the proverbial straw that broke the panel’s back was that the host called Final Fantasy: The Spirits Within a GOOD movie ... not to mention his unreasonable assertion of its claim to the “first occurrence of a space marine.” While he tried to tackle differences of various examples with humor, redundancy made of his pre-programmed wit little more than an annoying and stuttered rant.

“Otaku Culture 101,” the second panel I attended, was definitely not what I was expecting but in a very good way. It focused on the Tohou and Vocaloid aspects of Otakudom, things with which I was and still am not very familiar. I left early, however, as watching the panelist play video games and video game videos, without relevantly linking together cultural poignancies, seemed ... well, pointless. As explained to me later, the panelist did manage to tie together some relevancies at the end.

The unexpected pinnacle of my panel-going experience was the arbitrary attendance of the most academic-sounding offering on the schedule: “Asian Ball-Jointed Dolls as Visual Culture.” Despite the panelist’s seemingly creepy and frequent doll caressing, there were offered up multiple vantages on and aspects of the appreciation of said hobby as well as a rather adept examination of external media bias towards it (review/summary forthcoming).

Trying to end the panel experience on a happy note, I attended “Jawdropping Moments in Anime.” Two words: editing needed. Even if you forgive the showing of the entire Naruto Sports Festival episode, the subsequently selected clips could’ve been shortened with no adverse effect to the intended shocking/humorous situations, which were, to the panelist’s credit, decently chosen from fairly mainstream series. The only thing that made my experience lackluster, however, was that I saw this clip-show last year and, aside from a couple of new inclusions from anime I’ve already seen, everything was regurgitated and consequently seemed neither shocking nor worth more than an inconsequential chuckle of acknowledgement.

On the whole, CPAC staff and organization were superb. Room schedule postings and amendments were clear, and there were people at every turn to help attendees get wherever it was they were going. The space allotted for the combined Dealer’s Room and Artist’s Alley, moved from one gym to another on the evidently athletically oriented Stevens campus, was more than spacious enough to accommodate the traffic without necessitating the insult of the staggered wait lines of yesteryear. Also, tabletop and electronic gaming rooms offered a decent selection given their respective allotted areas, and video rooms were offering an eclectic mix of accessible anime. Additionally, I have to say that my inner-otaku regrets not having my picture taken with a maid at the newly instituted Tenshi No Ai Maid Café! or attending Cosplay Chess, especially as this year saw a significant increase in cosplayers.

All-in-all, despite disappointing panels and my own event choices, CPAC, which attracted such voice talent as Michelle Knotz, Bill Rogers, and Mike Pollock, still managed to serve up a decent, otaku-themed Sunday getaway from the everyday. The experience would not have ended on such a copacetic note, however, if not for dinner and discussion with Alain (Hisui of the Reverse Thieves duo) at the Japanese restaurant, Robongi. That conversation seemed to fill in everything CPAC panels left out.  I think, for next year, problems with panels could be well on their way to being solved by listening to suggestions on the CPAC forum's Guest Wishlist thread and inviting Charles Dunbar as well as the aforementioned Reverse Thieves.