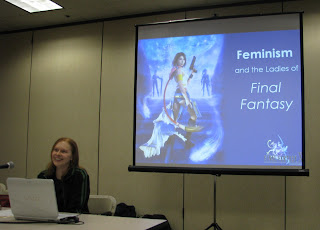 Kathryn Hemmann, presenter of “Feminism and the Ladies of Final Fantasy,” is a graduate student in the East Asian Languages and Civilizations Department at the University of Pennsylvania. Self-described as being involved with the semi-professional study of literature and cinema, Hemmann was spurred into questioning the presence and presentation of feminist ideology in the Final Fantasy (FF) series by comments made on fan sites that lauded the fact that there was “finally” a feminist incarnation of the game (XIII).
Until those types of statements caught her attention, Hemmann operated under two assumptions: that female characters can kick ass and take names as well as the male characters, and that “while the female characters are very, very pretty, so too are the male characters.” She didn’t think FF characters were portrayed as misogynistic or contributed to the propagation of any sort of misogyny, nor did the characters seem sexist or subject to sexism. However, Hemmann’s panel, focusing on the evolution of FF from phallocentric to gender-neutral, shows just how far the series has come in terms of granting its male and female characters equal opportunities despite inherent and universal physiological differences ... you know, feminism.


Along with its belief that no one should be judged or discriminated against based on their sex/gender, feminism maintains that boys and girls are constantly subjected to sexist social messages throughout their development. Case in point: the hundreds of hours spent playing RPGs (Role Playing Games) such as FF. The more players let themselves get absorbed into the fantastical worlds presented in such games, the more those same players are subject to messages conveyed intentionally via the game’s plot as well as unintentionally by the characters’ designs, roles, and dialogue. This is why Hemmann believes it is important to have strong female characters, free from vilification, who can serve as equally strong role models to those at the controller. Her panel explores three characters who uniquely exemplify, though traits and their contrast with history, the evolution of feminism in FF: Rydia (IV), Aerith (VII), and Fran (XII).

To provide a sense of history against which feminist progress in FF can be argued, Hemmann pointed out that early incarnations of the game had male directors; were intended for male audiences; and, with the exception of X-2, XIII, and VI, made the player’s character and primary hero male. This phallocentrism propagated the dominance of the heterosexual male economy of desire, where men are sexual subjects and women are sexual objects (boy gets the sword, boy gets girl, not vice-versa). FF becomes less phallocentric with each successive installment starting with IV, which introduces an extensive cast of characters with unique personalities, capabilities, and back-stories.

One of said characters is Rydia, who is endowed with a strong back-story, is responsible for saving Cecil, and brings value to her party with summon spells and what is portrayed as lethal black magic. This combination of these traits makes her a strong playable character worthy of player investment. Hemmann points out, however, that Rydia is never more than a supporting character in terms of strength because of the game’s MP limitations and negative connotations dealing with magic (innate, female) vs. brute force (skilled, male). Rydia also falls short in being portrayed as three-dimensional due to her sexualized outfit and almost total lack of interiority, the combination of which makes her a blank slate onto which male players can project their desires concerning this mysterious femininity.

Another pivotal character in the evolution of feminism in FF is Aerith, whose booklet description comes dangerously close to forcing upon her the tropes that define a Mary Sue. This character can never be a true Sue, however, because she does not serve as writer or reader stand-in. That role is for Cloud Strife, who is set up to have Aerith as his love interest. Thus her characteristics don’t make her someone every player wants to “be,” but be “with.” As with Rydia, Aerith’s traits are designed to bolster the egos and libidos of male players. However, female players have claimed the same traits to be empowering because of the effect they had on the male protagonist.

In contrast to Aerith, stands Tifa: a woman who “kicks ass, runs her own bar, and has hundreds upon hundreds of lines of dialogue.” Hemman said she enjoyed looking up at Tifa despite the graphicness of looking up her skirt as she posed for her victory stretch at the end of every battle. As revealing as it is, Hemmann says, Tifa’s pose is not sexist but empowering in the eyes of female players. That female gaze brings an antidote to the objectifying gaze of males.

What character better emphasizes objectified desire than FFXII’s Fran, right? She's tall and beautiful, has bunny ears, and wears a skimpy outfit comprised of black leather bondage gear. But Hemmann makes the point that while Fran’s exotic character design seems to be drawn for pure male sexual viewing pleasure, the characterization is not sexual in any way and is instead meant to signify her standing within her race in the context of the game. Older and more mature than other characters, Fran is involved in a relationship to a male partner that is characterized as friendly yet professional. Fran comes pre-equipped with a bow, but can be made into a “dual-handed weapon-wielding tank of a melee fighter” if so desired as leveling up is determined by equipped items rather than gender.

Initially in Final Fantasy, female characters were nothing more than static supporting characters for the dynamic male heroes. As the series continued, women in these games developed personality, inner thought, and strength. No more were female characters defined by who loved them. Instead, appropriate and realistic motivations were derived from who they wanted to be and what they wanted to accomplish as based on intricate back-stories. While female empowerment has been slow, it has been steady. Evidence as keenly picked out and analyzed by Hemmann smartly illustrates subtle and blunt changes within the context of both game and ideology, identifying female gamers and their gaze as a controlling force in an ever-evolving world.