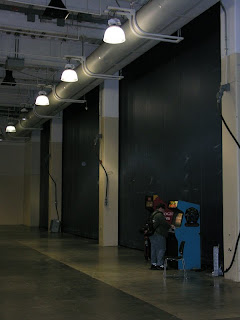 After two days of hectic panel coverage, Sunday was surprisingly laid-back. There were far fewer attendees milling about in many of the hallways near the panel rooms, so navigation was considerably easier than it was on Friday and Saturday. Additionally, there weren't a ton of panels I wanted to cover, so I had a chance to check out a lot of the other traditional areas of the con.

My first panel experience of the day, however, was the Akira Kurosawa panel, run by so-called "Dungeon Master Jim." It was the first presentation I saw from this prolific Anime Boston panelist, and I was a little underwhelmed. There were no visual aids (surprising for a panel about as visual a medium as cinema) and Jim seemed to have only seen the "big" Kurosawa films, as the audience ended up suggesting films for him to check out. I'm not a Kurosawa buff myself, but a tip for anyone running a panel about a director: Do your best to watch literally everything they've ever worked on. Your panel isn't worth anyone's time unless you have a thorough understanding of the topic at hand.

The video game room (an area I usually neglect due to all my press work) was massive, leading to amusing wide spaces between the different play areas (see this post's image). I managed to sneak in a game of Tatsunoko vs. Capcom, as I've never gotten a chance to play it, though I got handily beaten by a guy who had just started playing today!

Then it was off to Sam Kusek, Ken Haley, and Mike Ferreira's "From East to West: the Superheroes of Japan & America." Like Sam's previous panel ("Super-Flat"), it was very fast-paced, to-the-point, and well researched, and the three hosts bounced off each other well. Plus, I learned a lot about the history and influences of Japanese tokusatsu (special effects) shows, as well as some classic American comics like Superman and Captain America, all of which are topics I am woefully uneducated on.

Afterward I checked out the Dealer's Room again, this time with Sam and his buddies. After vacillating over the purchase of some old-school imported Japanese magazines at the Comicopia booth, I ended up buying a $2 Japanese children's book "Heidi, Girl of the Alps," featuring anime-style art but apparently having nothing to do with the Isao Takahata anime TV series of the same name. Naturally, this was from the same dealer (Mugen Toys) who sold me the Kosaku Shima books the day before! Then Sam, his friends, and I grabbed some great Asian food at a nearby Teriyaki restaurant, and I headed back to the hotel to catch our bus back to RPI.

My experience at Anime Boston was honestly one of the better ones I've ever had at a con, despite a few frustrating setbacks along the way. The wide range of panels and panelists opened up some great avenues of discussion, and I was able to cram in a wide breadth of events (panels and otherwise) in my time at the con. I'll write more about my specific high and low points in my upcoming con report, but let's just say that my long-awaited reunion with the city of Boston and its resident anime con was a very positive one.