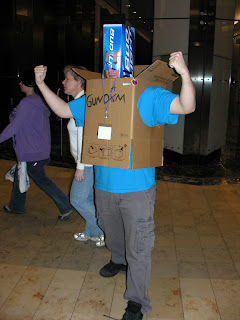 Day 2 of Anime Boston was just as hectic as the first, as I had scheduled myself for way more panels than I could actually get to. But despite frantically running around the con all day, I managed to sit down for a couple of really stand-out presentations.

"The Family That Geeks Together Keeps Together" was scheduled in a tiny little panel room and hosted by the Hoffmans (father Constantine, mother Jennifer, and son Greg), a family of geeks trying to spread the word on geeky parenthood and childhood at conventions. At times the panel boiled down to recommendations for getting parents into anime, but when the audience started discussing family dynamics and geekdom in depth, bouncing off of each other, it turned into a really enlightening panel.

I stopped in for a bit at Anime World Order's Gerald and Clarissa's "Tezuka 101," which was an appropriately introductory panel that followed much of the information provided in Helen McCarthy's excellent The Art of Osamu Tezuka: God of Manga. There wasn't really anything for an amateur Tezuka scholar like myself to learn, but it was quite in-depth for people new to the artist.

"It's a Rumic World," a presumably informative panel about Rumiko Takahashi, was basically just a fan-gushing session, not too appropriate for people trying to learn about the prolific manga artist. Soon after, I checked out "The State of the Industry," which featured ONLY Adam and Rojas from FUNimation. In fact, the Anime Boston-designated moderator never showed up, so Gia Manry (of Anime News Network) served as moderator for what ended up being a pregame FUNimation panel, albeit with more industry insight and less blatant marketing. (I recorded the whole thing, and may post it up.)

One of the highlights of my day was "Remembering Satoshi Kon," Daryl Surat's panel about the late director, which I served as co-panelist on. We packed the room, and after some tripping over each other's feet, we developed a pretty good rapport.

Sam Kusek and Eric Shorey ran a fantastic panel called "'What is Super-Flat': Where Anime fits in Post-Modern Culture," which was a very academic look at post-modernism with nods to Japanese artists like Murakami and anime like Paranoia Agent. I'm considering doing a write-up of the panel, as it brought up a lot of interesting ideas.

Gerald Rathkolb's "The Sane Fan's Guide to Mecha Anime" was a pretty thorough yet basic introduction to mecha, though he occasionally lapsed into more in-depth stuff before reeling it back. Proving his point that mecha fans can be totally obnoxious, some guys in Legend of the Galactic Heroes costumes ran into the room and screamed "Sig Zeon!" (a reference to original Gundam).

After grabbing a quick dinner, I headed over to the absurd clipshow that is Anime Hell, hosted by Mike Toole, Daryl Surat, and Mike Horne. It featured a lot of Daryl's clips from his Genericon presentation of "The Panel of Doom," so I had already seen a lot of it, and Daryl's laptop had a bunch of technical problems, but it was still a hilarious night.

And during a quick trip to the dealer's room, I managed to find some Kodansha Bilingual Comics Editions of volumes 1, 2, and 3 of business manga Section Chief Kosaku Shima, which I bought for $2 each at the Mugen Toys booth! Quite a find, apparently, though I didn't realize just how rare they were when I bought them.