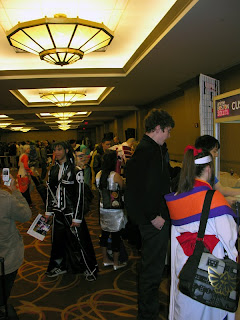 NOTE: This post was written last night, but since my hotel room doesn't have Internet, I had to wait till the morning to post it!

As with most first days of anime cons, today has been a complete whirlwind. I woke up at 4:30am to catch an early bus with the RSFA so that we would be on the show floor at the Hynes Convention Center in Boston by noon. Everything basically went off without a hitch, but the early morning departure meant no chance for a real breakfast, and my hectic schedule made it hard to find time to grab anything.

Once I had myself sort of settled, I decided to check in on the "Tokyo 'Nonexistant Youth' Bill and How It Affects You" panel, which was unfortunately run by what looked like a very nervous college student (EDIT: I am told by commenters that he actually has a very bad stutter in general) and filled with flimsy equivalences between the new bill and perceived future censorship.

"Fanthropologies," a panel run by the indomitable Charles Dunbar and featuring Alex Leavitt and Jennifer Fu as guests, was ostensibly about the study of fandom, both in terms of anime and other media, but it quickly turned into a much more broad discussion about copyright and fan ethics. I'm considering writing a full post on it, as a lot of the ideas that they brought up were really very enlightening.

Right after that, I had to rush to my Greg Ayres interview, only to be held up by a string of staff confusions and rescheduling that resulted in at least 45 minutes of idle time. Nevertheless, once the valiant Press Relations guy Jamison got Greg into the room with me, we had a great interview, talking over his views on the current state of fansubs and the industry.

After a trip to the oddly empty Dealer's Room with Anime World Order's Daryl Surat, I headed to Experts of Fan Controversy, which looked like it was going to be a fiery debate between some of the smartest minds in the industry, moderated by panelist extraordinaire Alex Leavitt. Instead it ended up being a totally respectful, insightful discussion between the panelists (which included AnimeOnDVD's Chris Beveridge, Vertical's Ed Chavez, MIT's Jennifer Fuu, Anime World Order's Clarissa Graffeo, and Tezuka In English's Ada Palmer), punctuated by some funny moments and Alex's wacky scoring system. I recorded the panel in its entirety, so you might hear that in podcast form very soon.

Then... not much, con-wise. We had a sort of "State of the Manga Industry" dinner that ended up being more of an informal night at a local Indian restaurant, and I was denied entry (again) to Daryl's "Anime's Craziest Deaths" panel since it was already jam-packed. (I'll save my full-length misgivings about this situation for the con report.)

Finally, I ended up just bouncing around to a couple of video rooms, settling on Golgo 13 TV, where I met two teenage girls who were loving the show. I recommended they check out the 1983 movie, the OAV, and the manga (and pointed out that most of them are available in the Dealer's Room at the con). It was one of the stand-out moments of my day — they seemed so excited, filled with the kind of exploratory attitude that we need more of as a fandom. Plus, who would've thought that teenage girls would be enjoying Golgo 13 that much? The show is for Japanese salarymen!