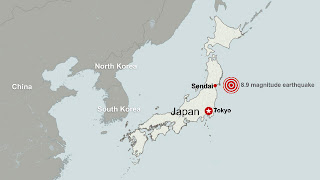 As I'm sure most of our readers have heard already, on Friday, March 11 a powerful earthquake (8.9 on the Richter Scale) struck just 80 miles east of Sendai, on the central Honshu island of Japan. In addition to shaking up buildings throughout Japan and causing widespread death and injuries, the quake also sent a massive tsunami thundering across the Pacific Ocean, which hit the northern coast of Honshu at speeds comparable to a commercial jet. The city of Sendai was hit with the brunt of the wave, but it also swept through various cities and towns in the north of Japan, resulting in the utter decimation of many towns and deaths numbering in the hundreds.

Additionally, a nuclear power plant at Fukushima (a city approximately 50 miles southwest of Sendai) was severely damaged by the earthquake, resulting in a breakdown of its safety system and a potential for dangerous nuclear fallout. Citizens have been evacuated from the immediate area and officials are hard at work on containing and cooling the reactors, but there is still a significant risk.

Despite all the bad news, it would seem that Japan's strict building codes and mandatory earthquake/tsunami training has been an incredible boon in ensuring the safety of their citizenry. While the death toll is certainly horrific at the moment, it would undoubtedly have been at unthinkable levels had Japan not been as prepared as it was. On that note, The New York Times is running an eye-opening story on Japan's anti-earthquake measures, which is a must-read for anyone interested in the implications of this disaster.

Plus, charitable organizations around the world have quickly mobilized to provide relief to the people in Japan suffering due to this unforeseen disaster. Most notably, the American Red Cross has been heavily promoting their SMS service, which allows you to easily donate $10 to Japanese earthquake relief by texting "REDCROSS" to 90999. (The organization also has a donation page on their site, where they can take larger donations by credit card or other payment methods.)

For more information on ways to help the Japanese people affected by the earthquake, visit the website Causes Exchange, which has a very helpful list of charities that are accepting donations toward the cause. (Big thanks go out to Anime Diet for providing the list, and for their swift coverage of the disaster.)

Meanwhile, Anime News Network is maintaining a massive list of anime/manga industry members who have checked in to confirm that they are OK in the wake of the earthquake and tsunami. Notable names so far include Mamoru Hosoda, Kenji Kamiyama, Tite Kubo, and Hideo Kojima.

Thank you for checking out [sic] on us! Artland is fine and so is Mr. Ishiguro. There were [sic] no damage in the building, and no one got hurt. We are working regularly from today, but everybody is a bit nervous because of the continuous after shake [sic]. I think everything will be back to normal by Monday.

If you have any news or stories about the earthquake, or if you have suggestions for ways that people can get involved in helping those affected by it, please leave us a comment on this post or send an e-mail to evanm [at] anigamers [dot] com. As new developments or suggestions come up, I will update this post with the new information.

EDIT 1: Vertical, Inc. Marketing Director Ed Chavez confirms in a Twitter post today that Mari Morimoto, Japanese/English translator for such manga as Dragon Ball and Naruto, is safe after leaving an evacuation center in Sendai with her mother.