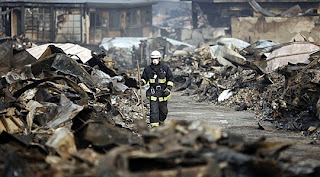 In my last post on the recent Japanese earthquake, I provided some basic details of the problems currently occurring in Japan in the aftermath of the massive 8.9 quake. And while I suggested you donate to charities to help the victims of this tragedy, Daniella Orihuela-Gruber from All About Manga has gone the extra mile and started up an informal group of anime/manga bloggers who are pushing for more donations.

Today Ani-Gamers joins in this campaign, reminding our readers that there is still months if not years of work to be done for Japan to rebuild after the earthquake. And, as Daniella points out, the $12 million in donations have not yet even surpassed the numbers for the recent Haitian earthquake or the Hurricane Katrina catastrophe in New Orleans!

For more information on donating, and suggestions on some great charities to give to (namely ShelterBox and the highly-rated Doctors Without Borders), check out Daniella's big Anime and Manga Bloggers For Japan post.