Monthly Snapshot is a regular column here at Ani-Gamers in which one of our writers chooses a moment from some anime, manga, game, or other media that really made an impact on them in the past month. It's a valuable chance to compare the subjective ways in which we all experience and analyze media. To read previous entries, click here.

Based on Yuki Urushibara's manga, the Mushi-shi anime directed by Hiroshi Nagahama follows "mushi master" Ginko as he observes and learns about the various mushi he comes across during his endless travels. Mushi are simple beings, the purest form of life. Basically, think of them as the myriad microorganisms which developed from primordial soup. While humans cannot usually see mushi, these creatures can reap effects that range from the physical to the supernatural.

Episode 22, "Shrine in the Sea," starts with a soft female voice that says, "Give birth to me once more. I want to meet you all over again," while a small wooden boat drifts on a calm body of dark gray water. A resigned splash is heard as a body, with arms floating upwards as if reaching out, sinks further and further downward into an abyss that swallows the scant light of a half moon.

Mio is troubled by the growth of her daughter, Isana. Every day she looks more and more like her grandmother, Mana. Because Mio never knew what her mother looked like as a child, the early years of raising Isana passed just like those of any other young mother. But as time went on, Isana began to develop features both aesthetic and habitual that reminded Mio her daughter was, literally, her mother incarnate.

Via flashback, Mio remembers her father ferrying his terminally ill wife to the Dragon's Palace, a place that enables those who lose their lives to its deep, glowing waters to be reborn in the exact same visage. Mio's father tries to justify this act to his daughter by explaining that no-one has ever recovered from the disease with which Mana is afflicted, and Mio's mother further insists on giving herself to the deep to ease her own fear of "going away forever." As the boat starts to leave, Mio stands in the water beside her mother, looses contact with her mother's hand, and weeps into the sea.

The next scene in the flashback reveals Mio's father pleading with his daughter to consider giving birth to the "uminaoshi" (the resurrection of someone taken by the Dragon's Palace) of Mana to appease all the family members who eagerly await her return. Mio agrees for the sake of the others' wishes but is adamant that the resulting child will not be considered her mother in any way aside from aesthetically nor bear her name.

This is how Isana was born as Mio explains it to Ginko, but she wants to know exactly what Isana is. Also in the dark, Ginko says he thinks it best if Isana's simply considered a child who looks a lot like her grandmother. But for Mio, the incarnation of her late mother addressing her as mom is maddening, especially considering Isana's growing likeness in appearance and mannerisms to those of Mana as well as the disassociation Mio feels by having given birth but not really having her own daughter.

This episode of Mushi-shi speaks to my love of stories of the sea and family and evokes a rocking motion that emulates the very waves it so often depicts. The episode is as turbulent theoretically as it is emotionally and culminates in a choice made by Isana. The theoretical rocking stems from the debate on paradise. Is the act of giving the dying the hope of rebirth while simultaneously filling the void of those left behind worth the emotional trauma inflicted upon those very same survivors by granting their wish with an empty vessel and subsequently sacrificing the individuality and destiny generally demanded or expected of the uminaoshi? The emotional rocking starts with a daughter (Mio) not wanting her mother (Mana) to go away despite her parents' wishes. That daughter then becomes mother to her mother (Isana), a child whom Mio simultaneously loves and resents as a reminder of the loss and circumstance that's been forced upon her. Finally, there is the daughter (Isana) who was the mother (Mana) of her mother (Mio) and is forced to decide at one point whether to risk her own existence to try and save her mother from the very mushi responsible for the village's fabled resurrections or become a mother herself to Mio's uminaoshi. Out of love for the experiences that carved Mio's soul rather than a genetic makeup, Isana chooses the former. 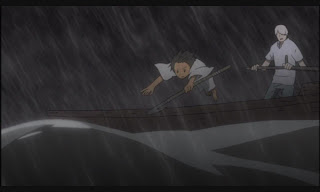