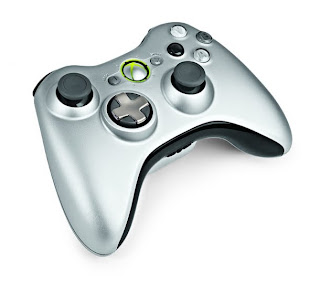 The only possible reason behind the release of this new version of an already outstanding controller is greed, pure and simple. For the pleasure of spending $15 dollars more than a regular controller to replace one that went bust or $65 in hopes of better functionality, what will gamers actually get when they buy the new Xbox 360 Wireless Controller with Transformable D-Pad? Unless their collection is dominated by titles such as Street Fighter, Dead or Alive, or similar fighting games, there is absolutely nothing gained aside from a compulsory, slightly discounted ($5.00) Play and Charge Kit they probably already own.

The big advantage, according to the product catalog on Xbox.com, is that the protruding D-pad can be tucked into a disc so that players can more easily perform "sweeping movements" in addition to "cardinal directional moves." I may have not played many fighting games since DOA4, but I never remembered the D-pad being all that much trouble. So basically, the new disc-integrated D(ummy)-pad is nothing but a cheat for the Hadoukenally handicapped.

The only other argument I've heard as to why this is such a fantastic "redesign" is that the D-pad is seldom used anyway. And while the D-pad has certainly become antiquated for motion control by way of standardized dual analog joysticks, the iconic cross has come to bear much more important functionality, such as quick item selection, character dialog options, squad-oriented commands, and various other in-game actions.

Unlike the redesigned Xbox 360 console (or 360-slim, as I like to call it), the new controller offers no real new functionality or benefits to anyone except a niche audience of fighting game newbies and obsessive veterans. Its new feature, the Dummy-pad, is merely a crutch for those lacking skill enough to emulate a rounded motion using a centrally pivoted plus or one more slight advantage to pros who already have each in-game character's every move memorized. I refuse to sincerely call it a redesign, because slightly different button coloring and nigh-unnoticeable ergonomic improvements do not a worthy $65 investment make.

I used this new controller interchangeably throughout a couple of hours of heated battles against an experienced fighting game pro friend of mine. No matter who was in possession of the fancy new controller, he still kicked my butt. There is no magical advantage to pulling off moves with this controller; the sneakers will not make you run faster, nor will the dress make your thighs look less composed of cottage cheese. However, the disc-based action does feel smoother when playing, and I'm sure that, in the hands of newbies and experts alike, such fluidity is both welcome and (slightly) advantageous.

So if a fighting gamer has a spare $65 burning a hole in his or her pocket and there are no new games on the chronological horizon that would compete for said cash, why not pick up this controller package? Any other type of gamer, however, should simply pass this off as a fadget (fad-gadget) and save the money for something more relevant or interesting.