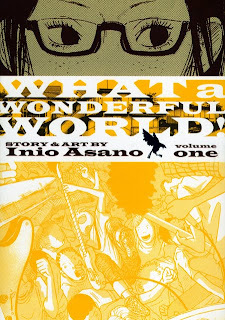 Because I love starting reviews with some kind of admission, I want to say here that I have been putting off reading this manga for a long time. Since May, in fact. (Ed. Note: The review was written in August.) Itâs not because I was rushed off my feet with other manga, but simply because I was afraid to crack it open for fear of it being too powerful for my weak psyche. Author Inio Asano also wrote Solanin, an amazing manga that I have a very hard time reading simply because it is emotionally powerful and I have to put the book down every 30 pages or so for fear of collapsing into a sobbing wreck.

Yes, Iâm a wuss. Deal with it.

What a Wonderful World, or World as I shall shorten it from here on out for the sake of brevity, is thankfully not as emotionally harrowing as Asano's other works in part due to it's fragmented structure. The manga is split into individual vignettes, each focusing on a single character and giving you a brief moment in their life before moving on to someone else.

Each story is wonderfully crafted, effortlessly introducing you to the new main character so you connect with them instantly each time, often with just a single panel. One such story shows you a girl staring listlessly at the split ends in her hair, and suddenly you are right there with her for the duration for her tale.

From there on you are hooked, each panel containing just the right amount of (or lack of) art, speech and action to keep you fully engrossed. Like having a door opened to find a tiny snowman with cigarettes for arms, with nothing else to clutter the page in between. The easy flow of the storytelling on the page is remarkable, as you'll find your eyes being drawn to the right place each time by the layout of both the panels and the items contained within. This helps the art pull off some amazing shifts in perspective to get you right into things without noticing how much the viewpoint has shifted.

All this helps you enjoy the stories on offer effortlessly, and break down any barriers between you and the drama playing out on the page.

The main theme the manga explores is that of thwarted dreams or expectations, and how the colorful cast of characters deals with them, or fails to do so entirely. The storylines contain just the right amount of grit and texture to give them depth without needing a cumbersome back-story to the issues that are presented, and at the same time they give you something meaty to chew on. The characters feel like actual people who have lived rather than blank slates who only begin to live when they are drawn. It's very refreshing in general to read something that is not just about dreams coming true but instead about opportunities lost, or times when things have slipped away. It also manages to avoid feeling grim for the sake of it, maintaining a very welcome air of absurdity whether in the form of death taking the likeness of a crow, or a turtle climbing out of its shell to escape it's owner. Everything presented as part of the human characters feels instantly relatable and, if it hits close to home, rather personal. Well, except the whole thing with the turtle. I would probably need some form of therapy if that happened to me.

Not all is sunshine and rainbows, however. Reading a whole volume in one sitting, even with its amazing pacing, can get very wearing due to the poignancy of emotion that is on display. There is only so much biting realism I can take before it begins to cause my soul to ache and thoughts to turn to happier things, and for this reason I would recommend spacing out your reading of World. Another problem is that the stories can begin to feel predictable as you are immersed by the atmosphere of the manga. After a few pages of a new story you can guess how events will play out in a vague sense. This sucks a lot of the magic out of the stories and so is best avoided by putting the book down for another day.

There is also some confusion surrounding the overarching plotline, or perhaps lack of one. Multiple times even in this first volume you will see characters recur, but in their new appearance the situation will have changed and so any previous experiences with the character have to be thrown out in favor of the new story being told. When this first happens it is very disorienting, and I found myself exclaiming "Heyyyy, wait a second! Wasn't she supposed to be in a band now?" before I realized what was happening.

So would I recommend it? Sure. World is a solid and very enjoyable manga to read, for me because it feels like a more manageable version of the Inio Asano I know from reading Solanin. It is also the first manga Asano published (Note: according to Wikipedia and other research) so it is useful to see the author's development from here into his later works.

World is a welcome shot of reality packaged just right to prevent it from hurting if things strike too close to home. You'll come out of reading it feeling a little wiser, if perhaps wearier.