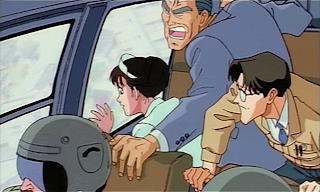 Monthly Snapshot is a regular column here at Ani-Gamers in which one of our writers chooses a moment from some anime, manga, game, or other media that really made an impact on them in the past month. It's a valuable chance to compare the subjective ways in which we all experience and analyze media. To read previous entries, click here.

First off, I apologize for this article being very late (I mean, it's basically an entire month late — not ideal for a monthly column). I've already explained why our posts were delayed after the new year, so I'll get right into things here.

During the course of my research for my "Satoshi Kon Tribute" panel, which I am going to run at Genericon this February, I have been watching through many of the director's influences as well as the anime he worked on. So, after viewing the 1972 Slaughterhouse-Five movie and Terry Gilliam's Time Bandits (1981), I came to Roujin-Z, a 1991 OAV conceived by Katsuhiro Otomo (Akira, Domu), directed by Hiroyuki Kitakubo (Blood: The Last Vampire, Golden Boy), and featuring background art by none other than Satoshi Kon.

The show presents itself with an equal dose of black comedy and social commentary, similarly to Kon's own Tokyo Godfathers and Paprika. This tendency to mix the seriousness of the situation — a runaway machine originally intended to act as a caretaker for the elderly — with its inherent silliness manifests itself in what is easily the most spectacular turning point of the entire film.

Dedicated nurse-in-training Haruko has been trying to rescue her patient, the elderly Mr. Takazawa, from inside the Z-001 machine throughout the movie, but has run up against stiff opposition from the two bureaucrats in charge of the project, Terada and Hasegawa. As the two men board a helicopter to track the movements of the Z-001, Haruko hops in next to them, despite Terada's fierce protests. Meanwhile, we realize that Terada legitimately cares about the elderly as he berates Hasegawa for not letting him know that the Z-001 was actually a military prototype. 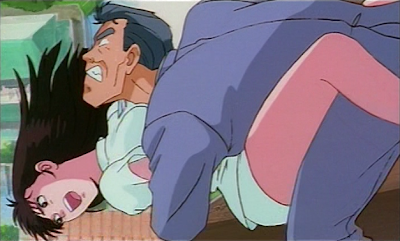 Suddenly Haruko spots the Z-001 speeding along a monorail track, and Terada orders the helicopter to go in for a closer look (never a good idea if Bubblegum Crisis is to be believed). As they approach, Terada throws open the door to yell out at the machine over a megaphone, but Haruko quickly attempts to jump out of the helicopter, screaming desperately to get the old man's attention.

What happens next is a brilliant expression of the essential messages of the entire film: Terada, who has been working to arrest Haruko throughout the story, grabs her before she can fall out of the helicopter, and holds her to keep her from jumping out again. She calls him a pervert, in typical anime style, yet Terada's immediate response to latching onto her is not to blush or get embarrassed, but to yell "You idiot! You'll get yourself killed!" In this brief moment of crisis, Otomo deftly shows the passion with which Haruko will protect her patient as well as the strength of Terada's conviction that all human life is sacred. 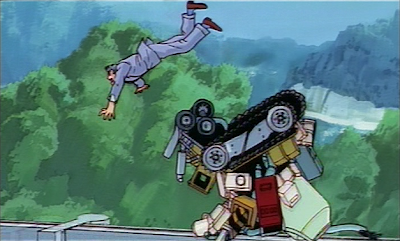 To cap it all off, the helicopter hits some trees while Haruko and Terada struggle, throwing the man out of the vehicle and toward the Z-001. Haruko immediately screams for Mr. Terada, only to see the machine reach out and grab him. (Indeed, even after he is safe aboard the Z-001, she tries to keep the helicopter flying low so they can safely extract him.) There is a cascading series of split-second acts of kindness in just these 45 seconds of film, all of which express a more optimistic twist to this ostensibly dark portrayal of the human condition.