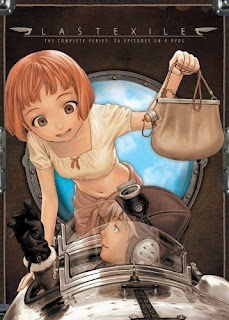 Ed. Note: Welcome to the second of our four "Anime Secret Santa Reviews." Our reviewers were given review requests as gifts from their Secret Santas, and are now unveiling their opinions of the shows they chose. For more information, check out our 2010 Anime Secret Santa introductory post.


You know you're in for a polarizing show when one of the biggest pieces of praise people can give is "it's one of the few shows by this studio that's actually worth watching!" Unfortunately for anime studio GONZO (Gankutsuou, Welcome to the NHK, Linebarrels of Iron), that's basically the compliment granted to any relatively successful series that they create, and for better or for worse, Last Exile (2003) sits among this short list of "not terrible" GONZO series.

The show begins in a vaguely steampunk era in which giant airships have become the primary tool of war. Our heroes are two young pilots who make their living as couriers on the wings of their small fighter plane-esque craft called a "vanship." Claus Valca is a quiet, kindly pilot with a penchant for finishing everything he starts, while Lavie is his hot-headed, impetuous, and intelligent navigator. As the guy piloting the vanship, Claus is naturally the hero GONZO chooses to focus on, while Lavie serves simultaneously as his childhood friend, romantic interest, and moral compass.

These two couriers are living a simple life in the shadows of their legendary fathers (couriers who flew together until their untimely deaths) when they find themselves tasked with transporting a young girl named Alvis to the "Kill 'Em All" Silvana, a notorious mercenary airship thought to suck the souls out of anyone who comes aboard. After narrowly escaping attacks from the Guild, a shadowy organization that exerts subtle control over all the world's militaries and governments, the two vanship operators end up joining the Silvana's not-so-scary crew in a mysterious mission to strike the very heart of the Guild.

On paper, Last Exile seems like an exhilarating modern military tale, set in the skies of a unique world bound by strange rules — and it almost is, too. Unfortunately, GONZO's execution is painfully uneven, to the point that I often wondered if the writers knew where they were going when they created the original concept. The story is roughly split into three acts: 1) introduction of major cast and factions, 2) the Silvana wanders around doing things and battling some people, and 3) final confrontation with the Guild. As you might be able to guess, the second act features no central narrative or even an attempt at a formula (which would have made it much easier to follow). Instead the characters just meet a few unrelated challenges and overcome them, all the while developing ever so slightly as both individual characters and as a team.

Unfortunately, that individual development often leads to dead ends, as with two of the show's seemingly important romantic threads that simply die out before the introduction of the third act. The overall development of the cast, however, is one of the Last Exile's defining characteristics. The sense of cohesion between the Silvana's crew might not be apparent at first, but the motley crew of pilots, mechanics, and bridge personnel really start to feel like one big team by the end of the series. The most apt comparison that comes to my mind is original Gundam (1979), though Last Exile certainly doesn't pull it off quite that well.

Despite the compelling sense of overall camaraderie, some of the individual characters can get truly grating after 26 episodes. Let's start with Claus: his personality is so meek and boring that he is effectively the same as any of the cookie-cutter protagonists in harem anime. Underscoring this unfortunate truth is his harem of girls, including Lavie, Alvis, the cold-hearted pilot Tatiana, and even the strong-willed Vice Captain Sophia. To make matters worse, Tatiana turns into a mushy little lovestruck schoolgirl when Claus so much as lends her his jacket, and Sophia's romantic encounter comes from so far in left field that you'll likely be throwing things at your screen in frustration. To be honest, by episode 15 I was convinced that Last Exile was a harem show in disguise.

Meanwhile, there are a few characters who really shine despite their disappointing company. Alex Row, the stoic captain of the Silvana, rocks all kinds of socks with his grumpy demeanor and tortured past, but cracks begin to show in his emotional armor as we learn more about his history and see him lose control near the end of the show. Dio (no, not that one) and Lucciola, two runaways from the Guild who join up with the Silvana, and Mullin Shetland, a musketeer-turned-mechanic, provide an interesting counterpoint to the rest of the crew as outsiders coping with the stress of turning away from their previous loyalties. On the bad guy's side, the sinister Guild leader Maestro Delphine comes off as a poisonously sweet version of Gundam's Haman Karn. 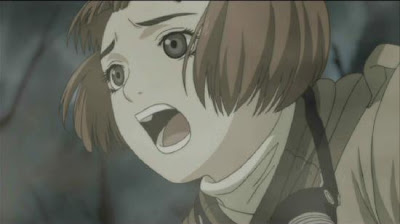 But as far as I'm concerned, the real star of Last Exile is Lavie Head, Claus's energetic navigator. Originally she seems like nothing more than an obligatory bossy love interest, but by episode 8 or so it is clear that her personality reaches depths far beyond those of her lame childhood friend. Even when she decides that she doesn't want to be Claus's navigator as long as he is flying in combat (a brave and unexpected decision that throws a fascinating wrench in the works), she remains one of the most well-developed members of the crew. Lavie feels with a magnitude that nobody else in the show does, careening between nurturing love for Alvis, passionate concern for Claus, and unexpected bravery in the face of danger. Through it all, she manages to be both completely admirable and believably flawed, a feat that I'm frankly surprised GONZO managed to pull off so well.

While Japanese voice actor Chiwa Saito's performance as Lavie certainly gets the job done, Kari Wahlgren truly makes the role her own. Especially compared to Johnny Yong Bosch's typically overwrought Claus, Wahlgren's Lavie is always believable, no matter where she is on the emotional spectrum. In terms of the rest of the English cast, despite some clunky deliveries they mostly stack up well, especially thanks to spot-on Japanese-to-English voice matching by Bang Zoom.

Nearly all of the technology in the show (intricately researched and designed by character designer Range Murata and Gankutsuou's Mahiro Maeda) is animated using GONZO's notorious CG style, which only rarely blends with the two-dimensional character animation used throughout. Movement is also irritatingly choppy during the fight scenes, undercutting the clear quality of the original concepts. The skilled 2-D animators who realized Murata and Maeda's beautiful character and costume designs likely could have transformed most of the storyboards for the battle scenes into thrilling dogfights, but as it stands the 3-D fights are merely passable (though GONZO gets points for including ZERO Gundam-style monologues or pilot-to-pilot arguments during fights). 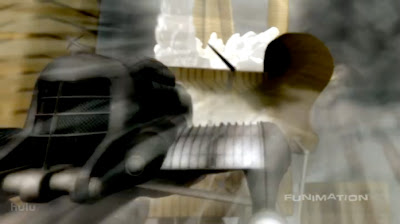 While I don't usually comment on such things, Last Exile's sound design is actually one of its greatest strengths. The sound effects used to represent the creaking and turning of machinery and the movements of the wind are far more visceral (and frequent) than the effects used in most other anime. This, combined with Maeda and Murata's unique and complex designs for clothing and machinery, makes for a lot of fascinating world-building potential. Unfortunately, spotty explanations of the factions and technologies often make it difficult to understand who is fighting whom and for what reasons. By the time the series reaches its exciting finale, it might still take a Wikipedia visit or two to understand just what was going on in the skies of Claus and Lavie's world.

Last Exile, like many GONZO series before it, is a valuable lesson in wasted potential. It's clear that the concept designers put a lot of work into the series during pre-production, and the animators' love for their material shines through in rare moments that belie Last Exile's most glaring flaw, which is that it doesn't really say or do very much with its own material. In the end, the exquisite presentation, the attempts at world-building, and the moments of genuine humanity come together to produce a work that is nothing more than the sum of its parts. We are left with a vaporous story about people in airships who fight each other.


This review is based on the Hulu streams (both dub and sub) of the series, provided by FUNimation.