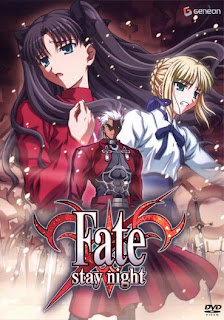 Ed. Note: Welcome to the first of our four "Anime Secret Santa Reviews." Our reviewers were given review requests as gifts from their Secret Santas, and are now unveiling their opinions of the shows they chose. For more information, check out our 2010 Anime Secret Santa introductory post.


Fate/Stay Night tells the story of ShirÅ Emiya, sole surviving civilian of a local holocaust, ten years after said event. The man who rescues ShirÅ becomes his adoptive father and instills in him a sense of pacifist justice before passing away. Having taken this philosophy to heart, ShirÅ embodies self-sacrifice and lives as a doormat for his classmates' inconsiderate soles. He does not turn down any request and is always willing to sacrifice his own well being for the welfare of others. As a result, ShirÅ's philosophy is challenged one day after summoning the world's most capable warrior (Saber) via latent magical abilities in a knee-jerk response to a mortal threat. By doing so, ShirÅ inadvertently enters an exclusive tournament known as "The Holy Grail Wars," in which all participants â pairs comprised of masters (magi, or magic users) and servants (warriors) â must either kill or be killed until only one magus and his or her warrior remain.

While the overall presentation of said story is awash with harem elements, the main conflict of the story, pacifism in the midst of battle, is aptly personified via the assignment of Saber to ShirÅ. Furthermore, implications are deepened via the introduction of ShirÅ's inability, caused by his lack of study in magic, to make Saber properly materialize. Thus Emiya and Saber, respectively as magus and servant, portray two incomplete parts that leverage each other to form a whole in the hopes of competently fighting against multiple pairs of complementary wholes. This setup is rife for conflicts, and the execution does right by exploring the main theme of action vs. inaction. However, the weaving of romantic tension turns too many scenes into boring and (for the most part) inconsequential harem tropes.

That's not to say that romantic tension doesn't serve some purpose. Rather, the execution of its repeated influence only weakens the story. I'd maintain there are two instances of romantic tension aptly serving the story: that of Emiya's falling for Saber and Rin's unexplainable interest in Emiya. While the latter only serves as a reason why a fellow magus would not kill, and instead might even protect, a competitor, Emiya's falling for Saber further lends credence to why he constantly puts his life on the line for what he views as his responsibility. Really, there's an essay waiting to be written on Emiya and Saber, and that fact alone makes the anime a worthwhile watch, but other aspects deserved to be touched upon as well. Art in Fate/Stay Night is standard fare but of above average quality (budget). Really, its only fault would be the showcasing of CG alchemic circles, the animation of which seems a little too out of place. Fight scenes are well orchestrated and, for the most part, fully animated, and the overall ambience is set rather perfectly. Deep hues of night, the only time during which combat is permitted, are foreboding and bloodthirsty, while days offer a palate more complimentary to the harem walls and the associated tension break. Character designs are also quite Romantic, especially concerning the servants' attire/armor.

Writing is a tad overly dramatic, except, surprisingly, for the harem aspects. Instead, I found myself actually liking how statements by the majority of the female characters never (or rarely) said anything directly. In retrospect, I also greatly enjoyed the underlying and understated theme of regret that manifests not only within the warriors throughout the series but which also resonates as the drive behind the warriors â each a mythical figure of ancient origin.

This review is based on rental copies obtained via the reviewer's personal Netflix account.