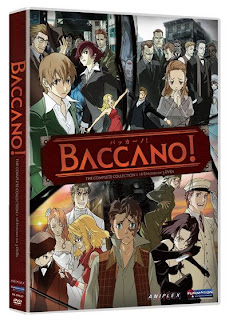 Ed. Note: Welcome to our fourth and final "Anime Secret Santa Review." Our reviewers were given review requests as gifts from their Secret Santas, and are now unveiling their opinions of the shows they chose. For more information, check out our 2010 Anime Secret Santa introductory post.


Before I talk about Baccano! proper, I'd first like to thank my Secret Santa, whoever they may be. All three of your choices were excellent. I had already seen and loved Kino's Journey (2003), but when it came to choosing between Baccano! and Eden of the East (2009), it was a close run contest. What made my mind up for me is the following sequence of events, which I shall dramatize for you:


It went something like that. What I present here is more something of a trip report than a full review.

Now onto the show itself. Having watched the main 13 episode series, I have come to regard Baccano! as a series of victories and small wonders, furnishing the viewer with a massively entertaining show that manages to satisfy without outstaying its welcome or stretching too far.

I will admit that until sitting down and watching it I have avoided all discussion or reviews of Baccano! (Including the Ani-Gamers review) as whenever someone has mentioned the show they have taken pains to point out that almost anything is a spoiler when it comes to the shows twisting plotline. I even avoided reading the synopsis on the back of the DVD set before watching. (I'm glad I didn't—whoever wrote the one on the Manga UK DVD set appears to have been drunk.)

To outline the show: set primarily in the early 1930s, Baccano! follows the exploits of a wide range of characters in both Manhattan and the transcontinental express train "The Flying Pussyfoot" as they all go about their personal business. The narrative jumps between different time periods and different characters with such frequency that the show's creators saw fit to make much of the first episode a primer for what is to follow. For most of this episode, Norio Wakamoto (with full R-rolling in effect) and his assistant prepare the viewer by discussing in a broad sense the different time periods, settings and characters that you are going to spend the following 12 episodes with, as well as showing the viewer some juicy snippets of what is to come. 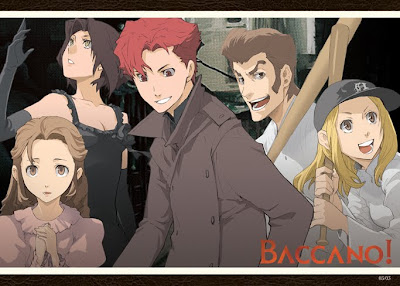 This initially flummoxing first episode nearly turned me off of the show. It felt like a warning, telling me "Hey, if you aren't down with whatâs going on now maybe you should just give up and put this back on your shelf. Oh, here is a quick cut of a young boy getting shot in the head. Bet you're interested now, eh?" Then, at the end of the episode something awesome happens (that I won't spoil) and I was hooked.

To cut to the chase, the plotting works marvelously. The highest praise I can lavish on Baccano! is that even with all the switching of character, time period and setting, the entire plotline comes together into a coherent whole that is massively satisfying, like watching a good detective story. The timing and placement of character and time zone transitions feels meticulously thought out and perfectly judged to maintain viewer interest without causing confusion or irritation. When transitioning between different time periods the show will throw up a black static image with the year that the following events take place in - the genius of these cuts are that they act as welcome breathing spaces in the action, heightening tension. The presentation reminds me an awful lot of the Guy Ritchie film Snatch (2000), which also uses multiple viewpoints to weave together a coherent and thrilling tale. I was worried towards the end that Baccano! would contract a fatal case of "Dumb Anime Ending" syndrome, but I was proven completely and wonderfully wrong. The ending was not bombastic or laden with sudden twists, but was immensely satisfying and ties the disparate plotlines up wonderfully.

The characters themselves also do a lot of the lifting when it comes to drawing you into the story, in part because there are so damn many of them but also because they are genuinely interesting. One particular character is called Jacuzzi Splot, and when I first saw him, i hated his guts. He had a dumb tattoo, a whiny voice, and a melancholy outlook on life. His one redeeming feature was that listening to Japanese voice actors try and pronounce "Jacuzzi" was endlessly amusing. But after a few appearances I began to root for the guy as his development on screen was so engaging and interesting to watch. This happens a lot with the characters â you might not like them, but you come to understand them through their actions. I can honestly say that Baccano! is one of the few shows that have had me rooting for a mass murderer. Multiple mass murderers, in fact. 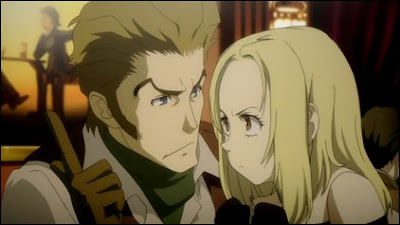 Not only are the characters interesting because of their actions, but they also look great. Everyone is stylishly drawn and with a great deal of care, something that really helps out not only in learning names but also in deciphering expressions and intentions of the cast and helping you connect with them. This ability to empathize with the characters really pulls you in, and I feel is best outlined by two of its best characters, Isaac and Miria. I love these two, so very much. Isaac and Miria are a pair of loud, boisterous, idiotic and immensely lucky thieves and the fact that they feel like believable characters while acting in such an absurd manner for their entire time on screen is a credit to the series. They are used just the right amount â too little and they would become a throwaway gimmick, too much and they would take over the show and ruin the magic.

I mentioned that the characters were stylish before. In fact the whole series is damn stylish. Every character, backdrop and action has style in spades. What makes this work is that the style is completely cohesive and well thought out to work as a single whole experience: no sudden SHAFT-style insanity, no winks at the camera, no snickering to itself behind the stage curtains. Every element presented on screen has a purpose and it was put there to contribute directly towards viewer enjoyment, drawing you into a coherent world that has a tangible feeling of authenticity to it.

To sum up my thoughts on Baccano!, after the end of the 13th episode in my third non-stop viewing session, I stood up to retrieve the DVD from the disc tray and thought to myself: "Wow. That was really enjoyable. I wish more things were made this well." I only regret I waited until I had to be pushed by Santa to actually sit down and watch it!

This review is based on the Manga UK DVD box set, purchased by the reviewer.