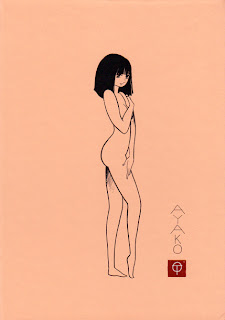 It's no secret at this point that Osamu Tezuka's reputation as the "Walt Disney of Japan" is fairly inaccurate. His corpus of English releases, which began with his more well-known children's works like Astro Boy (1952), has grown in years past to include a lot of the artist's more racy material, serving as a reminder that Tezuka was able to tackle a wide variety of styles. Ayako (1972), which came to American shores just last month in a new hardcover translation from Vertical, Inc., illustrates this better than nearly any other Tezuka manga I have read.

Gone are the science-fiction themes of most of Tezuka's other works. Even in his darkest of moments, such as the gripping Ode to Kirihito (1970), there are twinges of the fantastic that betray Tezuka's love for science fiction. In Ayako, Tezuka focuses on the harshness of a historical reality in which there are no robots or aliens or mysterious diseases — only humans are to blame for our misfortunes, and only we can pull ourselves out of them.

The Tenge family is reeling in the wake of the post-war American occupation. As they watch their lands in the Japanese countryside get sold off to tenant farmers, the once-rich clan sees the return of P.O.W. son Jiro, who is now working undercover for the American occupation forces. He comes home to find a family rife with sin and dark secrets. His brother Ichiro is letting his own father sleep with his wife in return for the family fortune, resulting in Jiro's new four-year-old sister/niece Ayako. After Jiro is implicated in a high-profile murder case, with Ayako’s testimony serving as the only evidence toward his indictment, the family decides to preserve their honor by locking her away in the storehouse cellar, to be kept there until she dies.

It is a testament to Tezuka's tight cast and vibrant characterization that he manages to keep the story interesting despite its frequent jumps in both time and place. The Tenges eventually spread out into different places and careers, but the connection to the original reasons for Ayako's imprisonment remain a burden upon all of their consciences, thus keeping everything centered around the title character. The small cast helps you create a deeper connection with them, as their relationships and feelings are all easily understood within the structure of their acutely dysfunctional family.

Ironically, though, Ayako herself is little more than a caricature. She emerges from her 23-year imprisonment as an emotionally stunted young woman, completely ignorant of many customs and ideas that come naturally to most people. This simplistic personality can get a little grating after a while, and it certainly makes her character hard to connect with, but Tezuka makes it clear that he intends her odd behavior as an expression of her tragic upbringing.

Speaking of tragedy, Ayako is horrifically sad beyond any other Tezuka manga I have ever read, and in fact beyond most other manga, period. With murder, rape, and incest throughout, this is not a book for the faint of heart. Sometimes it feels like Tezuka is just throwing in more tragedy for the sake of making you sadder, but it all ends up serving the author's ultimate message: a condemnation of secrecy and hidden sin. In the end, what destroys the characters is a compounding of everything they have ever done (and not done) to other people. As the vessel for the Tenge family's sins, Ayako gets the brunt of their love, hate, compassion, and anger, making its conclusion all the more impactful.

Throughout Ayako, Tezuka revels in the vastness of the Japanese countryside, providing beautiful full-page drawings of hills and fields alongside meticulously drawn cityscapes. Additionally, he tries his hand at recreations of photographic images, a technique that accentuates the historical relevance granted by his frequent references to real events during the Japanese reconstruction. It's also worth noting that only a single character from Tezuka's Star System (the detective Geta) shows up in Ayako, a very deliberate choice that serves to detach the characters and their predicaments from the sometimes whimsical worlds of Tezuka's other works.

Vertical's translation is great as always, but this time they've brought on Mari Morimoto, well-known translator of manga like Dragon Ball (1984) and Naruto (1997). The one notable facet of the translation, which may be credited to either Morimoto or the editors in charge of revising her translation, is the depiction of the characters' country accents. All of the Tenges speak in a Southern American accent, depicted phonetically in what I can best describe as the manga equivalent of a Mark Twain novel. I find that it adds a welcome sense of place to the work that manga often don't have, but some might find that they can only read "Naw!" so many times before it gets a little grating.

EDIT: Naturally, no review of Ayako can go without mentioning that it is flipped (i.e. reads left to right) and features beautiful art direction — from Peter Mendelsund — both inside and on its striking hard cover. Clearly Vertical did both of these things in order to promote it among literati types (as opposed to your average teenage manga fan in Barnes & Noble) as they did with Buddha (1972), and it does a great job. The flipping is an unfortunate consequence of this, but it should hopefully help the book find an audience outside of the manga crowd.

Ayako isn't quite perfect, mostly due to Tezuka's over-reliance on tragic twists and the title character's flat characterization, but as an examination of sin and long-term guilt, it is a powerful story, almost Shakespearean in its penchant for melodrama. Fans of Ode to Kirihito will find much to love here; in fact, its dedication to only a few locations and a centrally connected cast of characters makes it a little more accessible than the sprawling epic that is Kirihito. Be warned, however: Ayako is manga at its most tragic — in this seemingly endless bout of sin and suffering, no one is safe from the taint of evil, and no one is spared its consequences.


This review is based on a complimentary review copy, graciously provided by Vertical, Inc. (and given away to an Ani-Gamers reader after this review was written).

Reminder: Ani-Gamers is giving away copies of Ayako to two lucky readers. Check out the contest rules to enter!