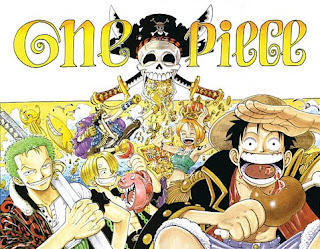 This month, the Manga Moveable Feast (or MMF) focuses on Eiichiro Oda's smash-hit shōnen manga series One Piece, and since I own 13 volumes of the wacky pirate action-adventure, I decided to contribute to the project. However, I've got a rather odd admission to make: I don't read One Piece anymore. In fact, I haven't read even a single new page of the manga since the spring of 2008.

Make no mistake, though, One Piece is actually one of my favorite manga of all time. Nearly three years ago, I simply stopped reading the books, and I have not reneged on my decision since then. In part because of this decision, and in part because of the series' instrumental role in introducing me to manga, One Piece has retained a very unique place in my heart.

My introduction to One Piece hardly has any of the nostalgic glory of old-time anime fans' origin stories, as it starts sometime in 2003 or so (right in the heart of the mid-2000s manga boom). One of my middle school teachers passed out a Scholastic book catalog, and in it, glaring at me with all his silly intensity, was Yugi Moto from Yu-Gi-Oh! It was an issue of Viz's Shonen Jump, on sale in my school's catalog! 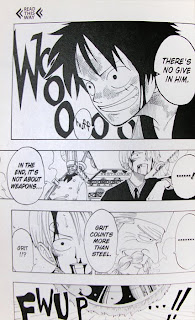 Naturally, after my experience with these cool Japanese cartoons on Cartoon Network's Toonami block (a frequent stepping stone for mid-'90s anime fans), I was excited to get my hands on the mysterious black-and-white comic book versions of the stories. Though I was hardly a fan of Yu-Gi-Oh! as a series, I was instantly hooked by two manga running in the magazine: Naruto and One Piece. They particularly grabbed me because I had never seen anime versions of them, unlike most of the titles in Shonen Jump.

Shortly after my first time reading One Piece (somewhere in the middle of Volume 2's Buggy Arc), I scrambled to pick up as much manga as I could get my hands on. I picked up the first two volumes of the terrible .Hack//Legend of the Twilight and received One Piece Volume 2 for my birthday. And with that, I was officially a fan of rubber-man Monkey D. Luffy and his crew of oddball pirates.

As a child of the Dragon Ball Z generation, I really felt a connection to Oda's Toriyama-inspired characters, stories, artwork, and sense of humor. Everything in One Piece, from the fights to the characters' dreams, is exaggerated, filled with a passion unparalleled by the actions of real people. For a wide-eyed middle school kid, new to the vast world of anime and manga lurking under the Toonami-glazed surface, Oda's powerfully kinetic yet inherently accessible work was just the kind of thing to propel me into full-fledged fandom.

And propel me it did! 2004, the year that marked my post-One Piece anime/manga obsession, also marked the creation of an overly ambitious little anime fan site called Anime Paradise, which would later become the Ani-Gamers you see today. 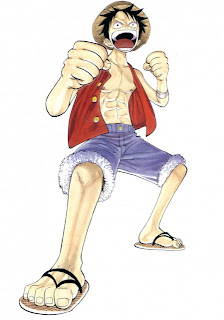 It's pretty clear at this point that One Piece is one of the defining works of my personal manga fandom, but why did I stop reading it after all the passion I had invested into it? It's very simple, actually.

At AnimeNEXT 2008, I pushed my way to the nearest manga vendor and started rifling through the books on the table. As I had done for the past few years, I picked up the latest volume of One Piece (14 in this case) and got ready to buy it. But then it hit me. Looking at the volumes on the table, I took note of the books that I would then have to buy after Volume 14. I thought it over in my head — "One Piece isn't even finished yet in Japan, let alone in the US. Heck, I don't even know when this Baroque Works Arc is going to end. It could be ten more volumes for all I know!"

So, on that day, I made the fateful decision, on behalf of my wallet, to stop buying One Piece. Of course, since I am strongly opposed to manga piracy (har har), reading it online is out of the question, so that means I effectively decided to stop reading the series, period. Since then, Viz Media's American run of One Piece has reached 55 volumes, and it still hasn't ended in Japan. After re-reading the volumes I bought years ago, I really miss the Straw Hat Pirates and all their crazy adventures, but the prospect of restarting my collection is a daunting one.

Indeed, that's the ultimate tragedy of the paying fan of any long-running, ongoing manga series; continued dedication to your favorite story requires an inordinate amount of money and shelf space. Nevertheless, the boundless motivation of Luffy and his comrades serves as a reminder of the importance of doing what you love, regardless of the obstacles in front of you. Who knows? Maybe one day I'll finally follow Oda's wisdom, pick up One Piece Volume 14, and start this old journey up once again.