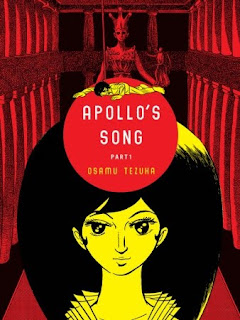 Given that the main focus of Apollo's Song is love and all the strife that results, I could get away with writing a "Love is a crazy thing, isn't it?" type of intro for this review. But I won't, because the manga does a much better job of doing that in its own introduction, which shows anthropomorphized sperm in a marathon race to reach the egg. That probably sounds absurd, but the reverence shown to love and procreation comes through the page, letting you know you are reading something rather special.

The main character of Apollo's Song is Shogo Chikaishi, a teenage boy who is brought in to a psychiatric hospital with a rather bizarre malady that is the focus of much of the story. You see, Shogo hates the concept of love. He is incapable of feeling it himself, and the mere sight of love or affection of any kind disgusts him so thoroughly that he feels an unstoppable urge to kill those involved, be they human or animal.

The doctor who takes Shogo on as a patient is rather troubled by this and so decides that a suite of tests and treatments are in order, including a terrifying session of electroconvulsive therapy. It is during this therapy that Apollo's Song introduces it's key element that sets it far apart — the Goddess. Taking the form of a massive female statue she scolds Shogo for his hatred of love and forces him to confront the root of his problem. Then, as a punishment for his transgressions against the sanctity of love, Shogo is condemned to a never-ending series of trials — over and over he must come to know love, but every time it is within his grasp it will be snatched away from him. The more cynical among those reading probably just laughed and yelled “Oh, just like real life then!” out loud.

What follows this proclamation is a series of discrete tales that follow the template that the goddess outlines — each time, Shogo comes close to being cured but is ultimately thwarted, usually in a harrowing fashion. You would think this pattern would get dull, but there is another facet to the story; you are never fully sure what is “real”, or what is a dream, a hypnotic suggestion, or even if Shogo is actually dead or alive for the majority of the manga. The different trials Shogo experiences also have their own back-story and love stories within them, further muddying the waters about what is taking place in reality and what is confined to his imagination. Even the ending of the story is wonderfully ambiguous and ends on a rather depressing note for Shogo, but leaves it up to the reader to decide what the ending entails.

I am a massive fan of this sort of reality-bending fiction and so Apollo’s Song scores lots of points with me, enough to make me overlook some of its nagging flaws. The biggest among these is the repetition of the individual stories within the overall plot arc — as mentioned before, they all follow the exact pattern that the Goddess outlines. In addition, some of the stories are instantly forgettable, and even on my fifth reading I am confronted with entire chapters I had completely forgotten and am beginning to forget even as I write this review. Another, more egregious issue is that Shogo himself is an unpleasant dick who keeps undoing his own character development. While this can be seen as a normal human character flaw, especially for someone as seriously ill as he is, it can become exasperating after he fails to even attempt to reform himself for the umpteenth time in the face of great pressure to do so.

This frustration with Shogo is eased by getting know him through the art, with all emotions laid bare on the page for you to see and feel as you read. Simply put, the facial expressions and body language in the manga are among the best I have seen. At one key moment in the story an entire page is set aside at time for a single facial expression of sorrow — a powerful moment hammered home by a very simply presented image. The rest of the art (especially the layout) is equally superb, with many nice touches and unique pages added to keep you interested. The emotional highs and lows (mostly lows, in this case) are wonderfully captured on the page, with each moment given time to breathe over multiple pages and clear layouts to heighten the impact. The main triumph of the art is that each separate story told within the overarching plot looks and feels like its own separate series. You can tell from a glance what the setting feels like and how it differs from every other story presented in the manga.

While I pointed out some flaws earlier in this review that may sound like deal-breakers to some, I am still a fan of Apollo's Song due to how much it rewards revisiting. While not a short book by any stretch of the imagination, the story is just the right size to pick up and read for the hell of it without without the investment of time that MW or Ode to Kirihito demand. Due to its very powerful message and reality-bending storyline, each reading can give you something new to chew on.

I have read this story in a multitude of personal states and attitudes towards love — while happily in a relationship, in a failing relationship, and shortly after a break-up, and each time it has given me something new to think about and an uplifting feeling despite its grim storyline.