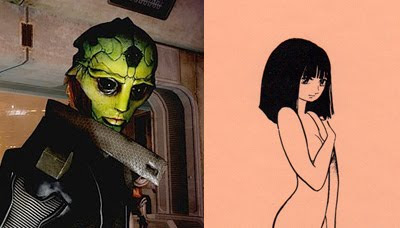 For the five days leading up to the New Year, Ani-Gamers is posting an un-ranked list of our favorite titles from the year 2010, featuring up to two choices from each writer. Be sure to check back throughout the week to find out what geeky stuff our contributors really dug this year! We now present the choices from editor-in-chief and podcast host Evan "Vampt Vo" Minto.

Mass Effect 2 (BioWare): When I first started hearing the video game press rave about Mass Effect 2, I knew I had to finally sit down and play the original Mass Effect. It turned out to be just about as disappointing as the reviews made it out to be — a fun ride chock full of potential that doesn't always deliver. Mass Effect 2, on the other hand, fixes nearly every glaring problem with the original game. That's not to say it's perfect, but it's hard not to enjoy this interplanetary heist story, with its quick-paced action scenes, satisfying leveling mechanic, huge catalog of background data on the game world, and endlessly entertaining cast that sticks with you long after you've put down the controller. Mass Effect 2 is some of the finest gaming I've had in a long time, and if you're at all a fan of sci-fi or RPGs, this is the game to pick up this year.


Ayako (Osamu Tezuka): While Japanese readers were introduced to Ayako in January of 1972, Osamu Tezuka's classic work of historical fiction arrived in the English-speaking world just this year, courtesy of publisher Vertical, Inc. and translator Mari Morimoto. Fans of the so-called "god of manga" (known for Astro Boy and Black Jack) will find him at his darkest point yet, as he weaves a dramatic yarn of deceit and suffering, set in post-war occupied Japan and centering around a young girl trapped by her own family in the storehouse cellar for 23 years. Despite its whopping 704-page single volume, Ayako is a gripping tale from start to finish, sure to leave even the most steadfast of Tezuka fans drained by the time they reach its powerful conclusion.