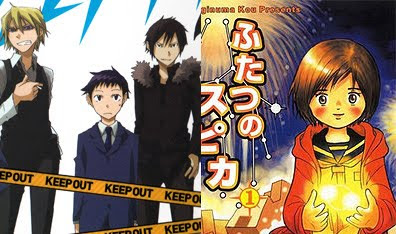 For the five days leading up to the New Year, Ani-Gamers is posting an un-ranked list of our favorite titles from the year 2010, featuring up to two choices from each writer. Be sure to check back throughout the week to find out what geeky stuff our contributors really dug this year! We now present the choices from video game reviewer Evan "BakaTanuki" Krell.

Durarara!! (Brain’s Base): This oddball show is a bit hard to describe within a few sentences. In fact, even naming the protagonist is complicated with so many characters and plot threads. From the director, studio, and original author of Baccano!, Durarara!! is rather similar, as it is built upon a huge and interesting cast of characters, their interactions, and how their own stories all intertwine into the overall weirdness of Tokyo's Ikebukuro district. The series begins with a high schooler from the country moving into Tokyo, and leaves the impression that it will be about his experiences with his new surroundings and how he will be become involved in them. While not completely inaccurate, everything in Durarara!! has some sort of twist to it — often many. Later episodes introduce and focus on other characters, and eventually these pieces all begin to fit into the puzzle. There is a ton going on in this show, and keeping up with it all is part of the fun. Things can get pretty convoluted, but the atmosphere is laid back and fun enough to not really worry about it. Durarara!!'s urban fantasy setting makes little attempt (if any) to stay grounded in reality, and it manages to pull of some over-the-top fantasy played completely straight. The visuals are all quite distinctive with a certain dark-urban aesthetic to it. The music is also very good with both jazz and rock elements throughout. Durarara!! is extremely enjoyable, and I was thoroughly captivated with it as I followed it through Crunchyroll's simulcasting. Despite only being released this year, I am currently on my third viewing and keep finding more to love about it.


Twin Spica (Kou Yaginuma): This story of a young girl pursuing her dream of becoming an astronaut is easily the best manga I have read this year. Asumi, a 13-year-old girl, has always wanted to be an astronaut like her mother was. The interesting thing about this goal is that her mom died in a rocket accident when Asumi was a baby. Twin Spica is a character drama at its core, as Asumi has to deal with various relationships with others as well as her own personal development. As expected, her father has trouble supporting her ambition to follow the career that lead to his wife's death, and she has to deal with a group of new classmates at the space training academy. There is also a mysterious boy with a Lion mask on that appears to be a figment of Asumi's mind. Twin Spica tells a heartfelt story with an extremely likeable lead. Asumi is very sweet, but has more depth than the typical cutesy anime girls. The astronomical elements add a realistic science fiction aspect to the story that enriches the experience without becoming tacked on “sci-fi.” The artwork is simplistic, but becomes more refined as the artist, Kou Yaginuma, progresses. Twin Spica has four volumes out and is off to a strong start. I find it to be an extremely compelling read, and another great release from Vertical, Inc.