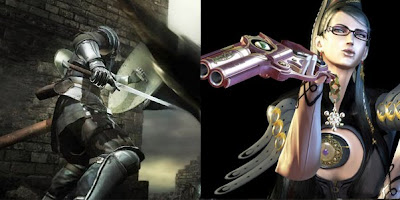 For the five days leading up to the New Year, Ani-Gamers is posting an un-ranked list of our favorite titles from the year 2010, featuring up to two choices from each writer. Be sure to check back throughout the week to find out what geeky stuff our contributors really dug this year! We now present the choices from manga and video game reviewer Elliot Page.

Demon’s Souls (From Software): While this came out in the US in 2009, its only this year that Europeans like myself have had the pleasure of being humiliated by the ruthless gaming experience that is Demon’s Souls. There are just so many things that make me love this game — the atmosphere in particular. The ravaged, demon-filled lands of Boletaria and the few people who still cling to life set an excellent tone for your character’s adventure, making you truly feel like the last hope for the world. Not that saving the world is an easy task — the game’s controller-smashing difficulty is well documented, but it never feels punitive. This, combined with the tight direct-action combat and lack of hand-holding, makes playing the game all the more satisfying, especially when you kill a major demon. I barely have time to mention the game’s amazing online system, where players can leave notes for each other as advice or enter another player’s game to either assist or antagonize them. Plus, Demon's Souls has buckets of re-playability due to the breadth of character options available, and the fact that you will grow to love the pain the game inflicts.


Bayonetta (Platinum Games/Nex Entertainment): It’s hard to come up with a fitting opening line to fully encompass the wonder that is Bayonetta, but here goes: Bayonetta is a game where you play a nine-foot-tall woman who wears clothes made out of her own magical hair, has control over time, can summon massive demons, and spends her time destroying hundreds of freakish angels in order to do something or other. I don’t remember the plot very well — while hilarious and a great way to string the action together, it is so insane that your mind rejects it the second you stop playing. Bayonetta is what is known in the trade as a “Character Action Game” — somewhat like Devil May Cry, God of War, that sort of thing. That means a third-person camera, a combo system using different weapons including ground and aerial moves, quick time events, and button-mashing special attacks. Except, Bayonetta is the only game of this genre I have enjoyed, let alone completed twice over. The controls feel so tight and accessible, saving you from being constantly being reminded that there is a plastic knob in between you and the game. The game also has a great sense of fun all over, in its level design, enemies, and weapons. (Even the in-game shop will make you crack a smile when you visit.) The sheer amount of love put into the game shines through especially well in the final levels, during which I could not stop grinning for the entire two-hour session.

A side note: make sure to play the Xbox 360 version of this game, as the PS3 version has some horrible loading issues that rapidly suck the fun out of it.


Extra Bonus Item! (Likely to annoy Evan! This is done in the name of beefing out the amount of anime in the year-end picks.)

Baccano! (Brain’s Base): Seriously, go and read my Anime Secret Santa post on this series. After reading it, it should come as no surprise to learn that as soon as I had moved into my new house I unpacked Baccano! to re-watch it. To be precise, it was the fifth thing I unpacked, coming after the sofa, the DVD player, the TV and the kettle (for tea, of course). My love for this series only grows as I watch it this second time, and I heartily recommend it. (Ed. Note: Baccano! was released in the UK during 2010.)