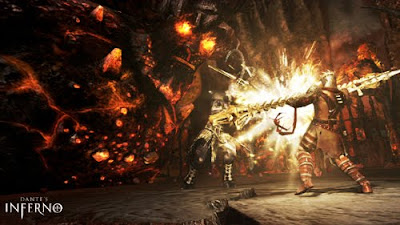 Once a day for the six days leading up to the New Year, Ani-Gamers is posting an un-ranked list of our favorite titles from the year 2010, featuring up to two choices from each writer. Be sure to check back throughout the week to find out what geeky stuff our contributors really dug this year! We now present the choice from video game reviewer Hayley "Mehket" Myer.

Dante's Inferno (Visceral Games): Mixing classical literature and video gaming technology doesn’t sound like the greatest of ideas, but Visceral Games and Electronic Arts do an amazing job portraying Dante’s journey in The Divine Comedy as hetravels through the nine layers of Hell. The game follows the epic poem with a surprising amount of precision, depicting characters and each level of Hell as accurately as possible. The people Dante meets in the poem are scattered throughout Hell, and the ability to absolve or punish them for their worldly crimes allows the players a brief moment to play God, reflecting on their own virtues and morals. While there are some deviations in storyline, there is much to learn about The Divine Comedy from the otherwise brutal, graphic game, including dialogue from Virgil, Dante’s guide, and the cantos shown to players each time they are defeated by Hell’s minions. The game is not for the faint of heart, as it sticks to the gore and fear that Dante inspired throughout the poem, but for those who like a bit of education in their video games, Dante’s Inferno is a necessity.