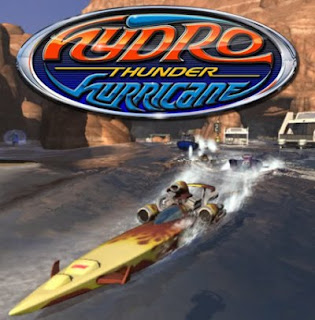 Hydro Thunder Hurricane, available on Xbox Live Arcade (XBLA), is definitely worth the $15, or 1,200 MS points, it costs. Two words: rubber ducky. Never mind that there are several levels, each with enough shortcuts and secret passages to keep even single-player races interesting, this game is entirely about playing with friends and strangers via Xbox Live or otherwise ... and with a rubber duck!

Although I never played the original arcade game upon which this version is based (Hydro Thunder), I downloaded the demo on XBLA, discovered how smooth the single player was, and after discovering the frustrations that came from the allotted collectible boats and tracks therein, switched over to my permitted 10 minutes of Xbox Live time (wherein you get to explore any track with any boat — including my favorite, the infamous rubber ducky).

How much fun you'll have, truly the value behind any game, depends on your predisposition towards high-speed, high-stakes racing and lording your own victory over the collective failures of your competitors (or the general determination to win despite the looming laughter of finish line-wading winners). Like the automobile racing game GRID, one slip-up can mean the difference between a lengthy lead and a laughable last, promoting great tension during any race. There is also a good sense of humor through the courses, be it from either the announcer's (all too repetitive) comments on whatever you’ve just collected or backgrounds featuring mighty Thor creating waves in Asgard and alien ships dominating what appears to be Willy Wonka’s version of Mars. It should also be mentioned that the graphics are good (particularly the reflections in the water and water itself), but nothing that’ll turn a mariner’s head away from an albatross.

The physics engine lends great variety to the gameplay in terms of in- and out-of-water maneuverability (both of which come in very handy) throughout not only individual levels but level types as well. All in all, there are three game modes: Race, Ring Master, and Gauntlet. Championship courses combine all or some of the former into multi-event ... events. In addition to keeping things interesting, these different modes unlock various in-game goodies, such as new boat skins, new boats, and more tracks. OK, it’s actually mostly the points earned per event that add to your bank, but the more you play on tracks with which you’re not bored, the more prizes you earn, right?

Whenever I play online (King Ink), I host all rubber ducky races, and the squeaking from the "boats" is only barely audible over everyone's laughter. Even if you only work a minimal wage job, isn't two hours worth of pay worth infinite enjoyment and adrenaline of online boat racing? You know it is!

This review is based on a digital copy of the XBLA game purchased by the reviewer.