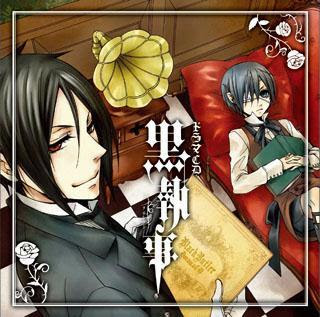 Ahh, Black Butler, also known as "Kuroshitsuji" in Japan. Infamous for its perpetually squealing teenage girl fanbase, it can be difficult for male fans to actually give it a try. However, after my stint with the surprisingly funny Axis Powers Hetalia (also known for its prepubescent female fans), I thought I might as well give Black Butler from A-1 Pictures (Kannagi, Welcome to the Space Show) a fair shake.

In the two dubbed episodes that I received on FUNimation's preview disc, however, I found myself giving Black Butler much more than a fair shake. You see, this series is in fact a shōnen (boys) manga, even though it clearly aims for a female demographic with its pretty-boy main characters and vaguely homo-erotic situations. This combination of demographics, now quite common in the manga world, means that Black Butler can provide an experience that's fun for more than just the core girls audience. Go figure!

Sebastian is a demon butler, bound to his master, Ciel Phantomhive, by a devilish contract — he must obey all of his master's orders, but Ciel has also agreed to allow Sebastian to consume his soul after the contract has ended. Following along with this delightfully Faustian setup, the series is defined by a dark, gothic style, complete with classic ornamentation in both architecture and fashion.

Plus, FUNimation's dub uses some surprisingly accurate British accents to help geographically and historically place the story in Victorian England. The voices don't always work — namely Brian Mathis, who weaves in and out of an Italian accent for the villain of episode 2 — but even some of the weaker performances like Monica Rial's Cockney accent manage to produce moments of comedy.

These two (predictably) self-contained episodes center around Sebastian's dazzling butler abilities, as he shows up all of the manor's servants with his masterful preparation of dinner and ... fighting prowess. In fact, the inclusion of fight scenes highlights the most important thing about these first few episodes of Black Butler — they combine straight-up visual gags with black comedy, creepy gothic macabre, light drama, and A-1 Pictures' best imitation of BONES-style (Fullmetal Alchemist) action scenes. The result is a fun, creepy, and exciting pastiche that never leaves you without a dull moment, despite its tendency to careen between styles.

Granted, this is just based on a limited preview, so the show could easily let me down after more than two episodes. Regardless, the beginning of Black Butler is undeniably entertaining; it may feature a pretty-boy butler being pretty, but his Golgo 13-esque ability to effortlessly complete any task, no matter how gruesome, makes for fun times, and the variety of comedic styles is sure to please nearly anyone.

Look for Black Butler on DVD from FUNimation Entertainment on January 11, 2011, and check it out with English subs right now on FUNimation's video portal, Hulu, and Anime News Network.


This preview is based on a complimentary screener DVD provided by FUNimation Entertainment.