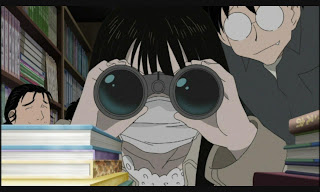 EDITOR'S NOTE: Welcome to our newest feature here at Ani-Gamers — the "Monthly Snapshot." In this article, published at the beginning of each month, one of our writers will detail a particular moment that made an especially large impression on them. It can be an anime, manga, or video game, and the scene can be anything from a hilarious comedy bit or a serious monologue. This month we begin the series with a Snapshot of the Genshiken OAV from Ink.

Near the end of the first of 3 OAVs that link Genshiken's first and second seasons, there is a scene that involves Ogiue walking into the empty clubroom, where Ohno's "homo dōjinshi" is spread across the main table. The material is meant as a trap designed to expose Ogiue's hypocritical loathing of yaoi. To the dismay of Genshiken members Sasahara, Madarame, Tanaka, and Ohno watching from across the quad, Saki innocently shows up and accidentally ruins the scheme by making Ogiue self-conscious just as she was reaching for a volume. What is seen as a detriment to the plan quickly becomes more effectively subversive to Ogiue's core character as Saki starts her not-so-rhetorical reflections on why girls would want to read magazines like those.

Feeling the situation at a standstill, Ohno — somewhat forced into action by her own ineptitude at telling lies and Saki's powers of remote manipulation — relinquishes a passive role of observation for an active one of instigation to get results. My anime moment of the month comes when Ogiue cracks from being harangued by the relentless Saki-Ohno tag team. The snowball effect thereafter, which stems from Ohno's intimate admission that made me laugh so hard as to miss the next minute or so of dialog, is a complement to how well the series can betray its characters' nominal traits for a belly laugh.

If the line of gunpowder is traced back from the erupted barrel, it starts with Sasahara recognizing "the birth of Evil Ohno," who is depicted as maniacally obsessive in her attempt to ensnare Ogiue. In addition to being shown as the primary binocular-holder, the usually shy and quiet Ohno makes outlandish suggestions, such as putting a bug in the room as to eavesdrop on audio, and bubbles over with maddened giggles that border on demented laughter ... the surgeon mask only adding to the effect.

Later, the confrontation itself is a betrayal of Ohno's character. In fact, Bizarro Ohno's characteristics are taken to such lengths that her constant pressing and egging-on is depicted as akin to Saki's usual behavior. And to top everything off, once Ohno starts acting like Saki, Saki starts getting a little more defensive and wallflower-ish. This shrinking back contrasts Ohno's sudden boldness for even more layers of subliminal laughter. The scene continues to steamroll, with Saki acting kinder to the nigh-exposed yaoi lover by defending her honor against the intrusiveness of Kuchiki's surveillance (and then pressing Ogiue about it herself) and a sadistic Ohno punctuating the intensely personal prodding with an example of Ogiue's shame. This pushes Ogiue over the figurative and literal edges. It is here that Saki prevents Ogiue from jumping from a third story window out of embarrassment while Ohno dances gleefully in the background, pleased as proverbial punch at the shade of red in Ogiue's cheeks.

This episode is all about introducing Ogiue, and the story structure manages to bring this about humorously by a long setup involving the reversal of key characters' weaknesses and strengths.