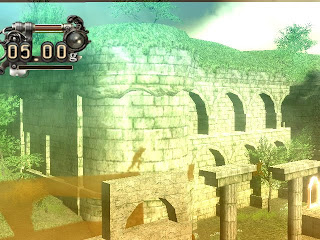 Last weekend, at the New York Comic Con, I had a chance to play through a few levels of a debug version of Lost in Shadow, a new platformer game for the Nintendo Wii, developed and published by Hudson Soft and directed by Osamu Tsuchihashi (designer for Dance Dance Revolution: Mario Mix, graphic designer for Mario Party 5-7).

Lost in Shadow follows a mysterious boy who, as we see in the first of its dialogue-free cinematics, has had his shadow cut away from his body by a dark, sword-wielding figure atop a tower. Now, the shadow, which has been thrown down to the ground and left without its memories, must climb to the top of the tower (which looks conspicuously similar to EVERYTHING from Shadow of the Colossus [2005]) to reunite itself with its original form. The twist: as the shadow, you can only interact with other shadows, not real objects.

The central gameplay mechanic will be instantly familiar to anybody who has ever played a traditional two-dimensional platformer. You run left to right along mostly horizontal surfaces, dodging arrows and enemies (which are also pure shadows without physical analogues, just like your character) in order to reach a door at the end of each level. In fact, according to the Hudson rep I spoke with, Tsuchihashi's primary inspiration for the mechanics was the original Prince of Persia (yep, the NES one).

However, what adds an interesting new dimension to the tried-and-true platforming formula of Lost in Shadow is the simple fact that most of the platforms are actually shadows of foreground objects projected on the background. Thus, the game actually forces you to rethink the way your character relates to the platforms he is standing on. Initially the only complexity lies in keeping your mind focused on the shadows despite changes in the objects casting them and the surfaces upon which they are cast, but later the game introduces areas called "Shadow Corridors" which feature more complex ideas like Echochrome-esque 90-degree perspective shifts and even three-dimensional movement.

Just playing as a shadow without any effect on the real world rather limits your options, however, so Hudson includes another character, a small fairy-like creature called a sylph who floats by your side but can become your Wiimote pointer at any time to help you past obstacles. Her main function is to find objects that can be energized and then moved, creating new shadow shapes for you to climb over, but there are some particularly mind-bending sequences where she can be used to move a light source, thus stretching all of the shadows on screen and making it possible to heavily modify the entire shadow landscape.

Some of the individual pieces have been used before (especially the cliché "ruinous fantasy adventure" aesthetic), but the overall effect of Lost in Shadow is quite striking in its novelty, and makes for an experience full of wide-eyed surprise as you are forced to rethink many of the basic physical properties of the platformer genre. Watch out for this innovative title when it hits North American stores on January 4, 2011 and look out for a full Ani-Gamers review in the near future.