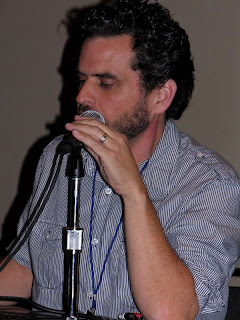 Bandai Entertainment's Marketing Director Robert Napton was on hand at the New York Comic Con/Anime Festival to announce a number of new re-releases of previously licensed Bandai properties. The first was the original Mobile Suit Gundam series (often called "First Gundam"), which will see a two-part DVD release in 2011 under the Anime Legends label with both the English dub and original Japanese. The Japanese track was conspicuously absent in Bandai's first North American release of the series (also from Bandai), drawing widespread ire from Gundam fans looking for the original audio.

Speaking of Gundam, Bandai will also be bringing Gundam Unicorn to DVD, with two episodes per DVD in a three-part release. Each DVD will retail at $29.98. Until now the series has only been released in Blu-ray format. Meanwhile, the Gundam 00 movie will be released with both Japanese and English dubs, though Bandai had no further details on the release plans. The film will see its American premiere at the New York Anime Festival this Sunday, October 10 at 2:00 PM.

Napton brought Cristina Vee (voice of Mio in K-ON!) on stage during the panel to announce two new additions to the cast for K-ON!: Cassandra Lee as Rittsu and Shelby Lindley as Mugi. Finally, Bandai will release Mamoru Hosoda's critically acclaimed anime film The Girl Who Leapt Through Time and Kenji Kamiyama's Ghost in the Shell: Solid State Society on Blu-ray. No details yet on date/price.