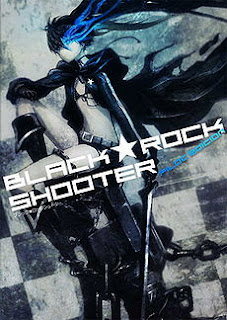 Black Rock Shooter is a rather odd thing in this day and age. It is a 50-minute OAV, initially distributed with a selection of magazines based primarily off of a Vocaloid song created in response to a drawing of the same name. A real, live OAV in 2010! Is it the savior of anime? Is it going to blow everyone away, as the hype before release insisted? Well, no.

The narrative of the feature (from Shinobu Yoshioka and Haruhi Suzumiya author Nagaru Tanigawa) is split into two halves: one showing a mundane reality that provides the background and setup, and a second set in a bizarre other reality which shows the action and resolution as a result of the developing background. The two separate plotlines eventually resolve, providing the convergence point and the grand ending to the events at around the same time. If you have ever read Haruka Murakami's Hard Boiled Wonderland and the End of the World you will instantly recognize this structure. This can be very effective if pulled off well, as it keeps you invested in seeing how the separate worlds resolve, as well as seeing how they intersect.

In the case of Black Rock Shooter (or BRS, as it will now be known for the sake of brevity), this structure is a bit of a mixed bag. The animation's two halves comprise an idyllic school day story on one hand and a fantastical action flick on the other. I went into this full well expecting to love the half made of bombastic crazy action and hate the flat school day crap but it soon turned out to be the exact opposite. The parts set in reality show a poignant, if slow to start, exploration of friendship and jealousy, while the action portion is a limp, boring attempt at being badass that forgets to engage the audience.

What is the cause of this discrepancy then? In short, it is the lackluster animation quality that persists throughout. More than once I checked the integrity of my copy to ensure I was not missing anything due to video/DVD player issues. While the individual frames look fine quite often it feels like frames are missing from the timeline, making the animation flow look cheap and nasty overall. This became obvious to me in one scene where the main character fumbles with a hot piece of toast fresh from the toaster. Both the toast and her hands teleport from one place to another in pursuit of each other; this made the scene look absurd and broke me out of the viewing experience. This issue exists throughout, though during the quieter and more measured slice-of-life segments it is much less of an issue due to the obvious lack of action. During the other half of the OAV, the supposedly action-packed half, the laziness in the animation really hurts the presentation. Action scenes appear poorly thought-out and lack any snap or pop in the proceedings — instead of drawing you in, the fight scenes leave you feeling like a bemused bystander watching something mildly bizarre happen, such as a pensioner dancing at the bus stop. Even things that should be bad-ass will leave you feeling nothing due to the cheap and distracting skips in animation, the Michael Bay-style camera angle shifts, and the slow pace of the action.

Something else that irked me about BRS was the music. In short, I can't remember a single note of it. Every track is utterly forgettable and as soon as it stops playing you are left with nothing. For something born from the seething crazy morass of the Vocaloid fandom, surely they would be able to rope in some decent musical talent to bolster the soundtrack? Well, apparently not.

One last annoying thing, just to get it out of my system — the last scene of the OAV, the "stinger" if you will, is the same kind of inane cheap shot as was used in the closing scene of the US Godzilla film. I'm surprised a narrator didn't suddenly burst in bellowing "Everything is safe now... Or is it? DUN DUN DUN" when this scene played out.

So, what did I actually like? Well, as mentioned before, I found myself enjoying the slower, school life half that was used for character setup. As it develops, this plotline begins to take on a very effective, melancholic feel that reminded me a great deal of 5 Centimeters Per Second and The Girl who Leapt Through Time. This was especially true in regards to the themes expressed, reflecting on the distance that can grow between people through the passage of time or inaction. The great shame of this is that as soon as it looks like the emotional storytelling is starting to get going, the two plot arcs converge, the story transitions to the other half you have seen play throughout the OAV, and the story ends. As blasphemous as this may sound, perhaps this film would have been better served with a strictly linear narrative, with the emotion-heavy first half able to carry to action-based second half.

Did I enjoy it? I suppose so, although I was dangerously close to shutting off the OAV multiple times due to sheer indifference at what was occurring. I almost wish that the crew behind the animation could be given a second go at making this product to do justice to all the hype and expectation, but that's not how the world works. Would I watch a second episode? Sure. Would I watch this one again? Probably not.

This review is based on a DVD release, purchased by the reviewer.