It’s a testament to Charles “Anime Anthropologist” Dunbar’s dedication and tenacity that, despite abruptly truncated time slots, he keeps modifying, adding to, and spinning off panels that very adeptly guide listeners through general mythologies while connecting their more specific nuances to examples in modern culture. The two Dunbar panels I caught at Otakon 2010 — “Dead Like Us: Shinigami and the Japanese Idea of Death” and “Modern Mythology: Mythic Elements in Anime and Video Games” — exemplify this notion.

Both were in-depth panels that ran audiences through the historic mythos within Japanese culture and then applied these stories to examples within the modern media of anime and video games. Dunbar’s delivery brings with it a tone of exaltation that can only be found in someone who not only enjoys carrying around a basket filled with the fruits of his labors but in sharing those fruits with others. As enjoyable as they are informative, both “Shinigami” and “Modern Mythology” have so much to offer that summarizing them would be as insufficient as it would be insulting to the original content. Luckily, according to Charles himself, the panels will soon be posted on the website Weekend Nihonjin, which also offers links to his blog, Study of Anime, anime culture-related articles, and a schedule of forthcoming panels. 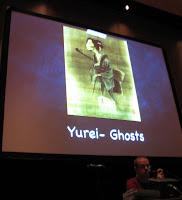 Time allotment would perhaps be the only drawback to these panels (always leave them wanting more). At the con, Dunbar compensates for this by speaking very quickly but very clearly through the presentations to get as much information across as possible. This isn’t a bad thing, although anyone taking notes without an audio recorder, steno machine, or net/notebook will start a small brush fire with via pen-on-paper friction. As Dunbar is constantly researching and adding to his panels, he also compensates for time by ... making more panels. Specifically, he moves general info to the more general panels while endowing more specific presentations with additional notions and examples. So next time you see any of the aforementioned panels or the name Charles Dunbar attached to a new one, check it out! Even if it's on a topic you've caught before, there's bound to be new, interesting, and entertaining examples for you to enjoy.