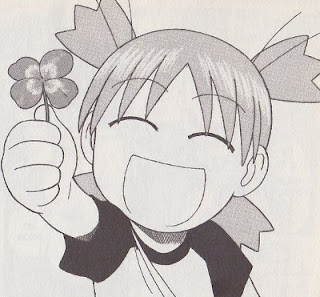 Having found out that Yotsuba&! was this month’s selection for the Manga Movable Feast a little late in the game, I scrambled to re-read it to celebrate alongside everyone else who was picking up this title — whether revisiting it or starting anew. Devouring a volume or two at a time in-between a rather hellish work schedule, I found myself amazed that I never tired of Yotsuba’s cheery antics despite reading it at a breakneck pace. The work presents you with a rapid-fire series of idealized events and adventures that would normally become tiring in a long reading session of manga. Even Sunshine (Hidamari) Sketch, a favorite of mine, gets tiring after a few chapters of consistent reading.

Yotsuba&! is soothing to read, and as the Reverse Thieves have already pointed out a part of that is due to the pervading nature of nostalgia that suffuses the work. Another part, I feel, is that even despite her many actions and traits, the titular character Yotsuba Kowai is someone who we know next to nothing concrete about. In this way she is a great character to act as an observer for the reader, even when she is the one initiating the actions or making the discoveries. 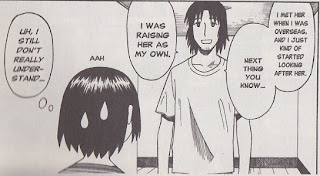 First of all, we are told very few solid details about about Yotsuba’s origin, and even her father is rather sketchy on the particulars. We know she is an orphan (as outlined in Chapter 6), but when pressed for details her dad tells us that he “met her while overseas, and just kinda started looking after her”. Fuuka fills in for the reader here by admitting that she doesn't really understand, but then something much more interesting happens (a thunderstorm) and the topic is dropped as Yotsuba runs outside to play in the rain. The main theory paraded around about this can be seen in a well distributed piece of fan-art that shows Yotsuba as a ragged orphan in a war-torn country. Whether this is anywhere near the truth, or even if there is a canon answer, is unknown.

We don't even know for sure what Yotsuba’s age is, and she and her adoptive father even have a confused conversation about it when buying a bike. Any mention of a mother goes right over Yotsuba’s head without comment, and the manga then typically shifts to a different and much more fun topic. It is refreshing to have a character without any parental issues present in their personality, and this makes it a lot easier to relate to the nostalgia present in Yotsuba&!. After all, no one wants to be reminded of the bad stuff in a whimsical tale. 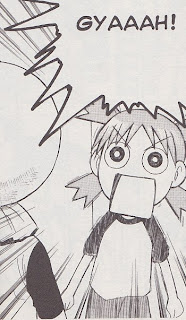 Linking in with her origin is Yotsuba’s appearance. Many characters, especially incidental ones, question whether she is a foreigner upon first meeting her, a not unexpected reaction given what little we know of her origins, and also how she acts. There is an additional reason as well — her trademark green four-pigtailed hair. While crazily colored hair is nothing new in anime or manga, the world of Yotsuba&! is grounded in real life, and no one else has their hair in such an outlandish hue or style. Characters even marvel at the bizarre style, further re-enforcing how much the energetic little girl differs from the norm.

Then there are the more mundane, common sense reasons that make Yotsuba stand out. She never tires of looking for adventure each and every day, is enthusiastic about absolutely everything, and is for the most part impeccably behaved apart from the odd, endearing, and quickly forgiven mischief . Yotsuba is the perfect little friend to explore the world with, a fountain of endless curiosity and enthusiasm that makes the world a better place. Even her tantrums are (mostly) well founded, in stark contrast to normal children. (I remember being a selfish little brat myself when I was five-ish.)

Yotsuba is an outsider in her own manga, and it is because of this that the reader never gets sick of her antics. We don't know much about her, and don’t care to find out beyond the basics presented as it may disrupt the warm fuzzy feeling that the manga provides. Hell, what if Kiyohiko Azuma went crazy one day and decided that Yotsuba’s origin is that she is a 1,000-year-old vampire stuck in a tiny body? All the fun would leave the title faster than air out of a popped balloon.

Knowing nothing about Yotsuba lets us get on with the very important business of enjoying her company in her magical, whimsical adventures full of cardboard robots powered by money and flower cupids. It’s much better this way. 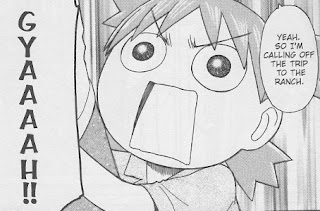