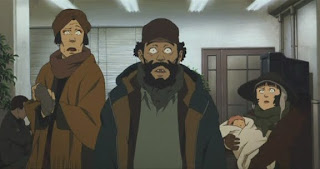 Ani-Gamers is publishing a handful of messages from our bloggers expressing our personal reactions to the great loss that is the death of anime director Satoshi Kon. This time manga/game reviewer Elliot Page graces us with a Kon-related story from his university days.

I wanted to write about a way that Satoshi Kon affected my life for the better, and at the same time share my first experience watching his work. Thankfully these events are one and the same.

In my first term of university, I was confused and without direction. I had moved halfway across the country to undertake a course that was beginning to look terrifying and was almost completely alone except for a few rocky friendships I had made.

I attended the university anime club, with all its bizarre personalities and rather questionable programming decisions, and was on the verge of giving up on it (and anime as a whole, really) when one week I strolled in for “a very special presentation”.

That presentation was Satoshi Kon’s Tokyo Godfathers. I didn’t know then it was directed by him, and I didn't even know the full title because the guy with the huge head who sat in the front row obscured the title.

The movie was wonderful. Utterly wonderful. I’ll save you the gushing attempt at a review and simply say the characters enraptured me completely and it had complete control of my heart-strings after five minutes.

Not everyone loved it. Some people, including the club chairman, left outright or started to gossip amongst themselves and were tersely asked to leave. One rather irritating specimen gave a theatrical yawn before strutting out, adding “Well, have fun kiddies!”

I don’t remember any of these people. I didn’t have much interaction with them in the anime club or outside of it.

The people I do remember were those who remained until the end of the film. Once the credits ended and the harsh, cheap lighting came back on I sat with a core contingent of survivors, most of whom I got to know over my time in the anime club and while I was at university in general.

Sat is the wrong word however — I was hunched over, sobbing like crazy. I cry easily at films, and Tokyo Godfathers did the emotional equivalent of running over my heart. To my left was a man who looked much like a bear due to his amazing beard — he was having a hard time holding back his own tears and give me a spare tissue. This dude became one of my best friends at university and we still stay in contact as best we can. To my right was someone gently patting my shoulder and managing to remain somewhat stoic, although she admitted later that she cried once she was out of sight of the congregation. We later entered into a rather rocky romantic relationship but remained good friends to this day. The rest of the room, approximately ten people, I became at least good acquaintances with over time. Perhaps we had undergone a shared experience, although no one ever pointed it out.

The president of the club came in, said “See you next week!”, and took her DVD player home. I came back the next week and the rest of my first two years of university, my faith in animation restored by the film. I made some solid friendships, some of which remain to this day and all of which helped me through the uncertain period while I was starting university.

Satoshi Kon made my life better, and for that I am eternally thankful.