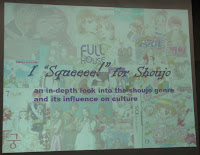 It’s nine in the morning on the last day of Otakon and more or less everyone’s operating on just a couple hours of sleep, so what’s the best thing to do? Go to the "I Squeeee! for Shoujo [sic]" panel of course! And the worst thing to do at said panel to wake up the considerable number of bleary-eyed attendees? Make them "squeeee" at the top of their lungs to attract more of the same. After a slight intro to what defines shōjo, the presenter started on what amounted to a cup of coffee in panel form: a “Shoujo [sic] or No” game show that quizzed audience members, upon seeing the opening sequence from select anime series, on if they were shōjo or not. None of the participants gave any wrong answers and we all walked away with prizes provided by FUNimation (thanks for Red Garden), and then the lesson began proper.

Defined as media aimed at females aged from 10-18 years old, shōjo generally features a female protagonist in any of myriad melodramatic circumstances. Content is determined by intended demographic and therefore not bound by subject, style, or genre. Storyline usually revolves around the protagonist, but plot is secondary to characters and their relationships, which are developed and maintained mainly through conversations.

Shōjo contains various sub-genres that provide templates or empty stages upon which the characters can develop:
As for shōjo’s history, one can trace it back to the founding of the magazine Shōjo Kai (Girls’ World) in 1903. Simple, single-page strips appeared in such magazines until the 1930’s, when more sophisticated humor-strips began to become a recognized essential feature of said magazines. In 1939, however, shōjo content declined as WWII progressed, because the material was seen as frivolous and distribution concerns arose over paper rationing. Starting around 1945, Osamu Tezuka (among others) revitalized shōjo with Ribon no Kishi (“Princess Knight”), which introduced intense drama and serious themes. Time passed, and 1950 to 1969 saw increased demand for solidification of shonen and shōjo genres. Like an out-of-control snowball barreling down a mountain, mid-'60s shōjo expanded its legacy and newly adopted content by increasingly depicting teens in love. This led, in the late ‘60s, early ‘70s, to the development of counter-culture within shōjo manga. A new flood of female manga-ka appeared (with a vengeance) to bring critical acclaim to the often-disregarded genre. Loosely defined as the "Year 24 Group" after the members' approximate ages, these manga-ka examined sexuality and gender issues ... and also invented yaoi (shōnen-ai, a.k.a. Boys Love).

Be it manga, anime, or live action, shōjo has and continues to influence artistic content for better (Hell Girl) or worse (Clannad). It continues to evolve as well, reflecting the times and attitudes of those it is surrounded by.

Overall, this panel was great as an introduction for any unaccustomed with the genre, but the history portion of the panel read much like a Wikipedia page despite the cuteness with which the panelist delivered the information and examples therein. I do lament lack of focus on cultural effects, but for an hour time slot, I think all went well for an intro course in squeeeeing.