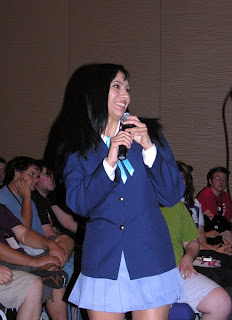 I apologize for the lateness of this article, but I've had limited Internet while on vacation.

North American anime distributor Bandai Entertainment was out in full force at Otakon 2010 in Baltimore, packing their panel room to capacity (something only achieved by a select few panels all weekend) and drawing a large group of anime press.

Bandai's two big acquisitions were Sora Kakeru Shōjo (The Girl Who Leapt Through Space, a.k.a. "SoraKake Girl") and My Otome o~S.ifr~ (the 3-episode OAV prequel to My Otome), both of which seem a little too unmarketable to be honest choices from Bandai's North American division. The most likely explanation is that both series were forced on BEA by their Japanese parent company or sold in a package deal. 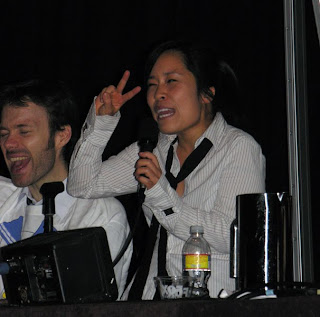 Meanwhile, Bandai also fleshed out two of their existing licenses: Gundam Unicorn and K-ON! The second volume of the 6-episode Gundam OAV series (entitled "The Second Coming of Char") will run slightly longer than the first episode at 59 minutes, and the Blu-ray will also feature 29 minutes of bonus footage. It will be available November 2010 in the Bandai Store (street date price $44.99, pre-order $39.98). At other online retailers it will sell for an SRP of $59.98 (barring those stores' individual markdowns).

On the moé front, K-ON! — the slice-of-life series about a group of high school girls in a light music club — will be receiving an English dub from Bandai's mainstays at Bang Zoom Entertainment, including Stephanie Sheh (who was present at the panel) as Yui and EDIT: Cristina Vee* (who showed up in-costume to sing a batch of K-ON!'s songs) as Mio.

* We originally referred to voice actor Cristina Valenzuela (also known as "Cristina Vee") as "Christina Zee." We apologize for the error.