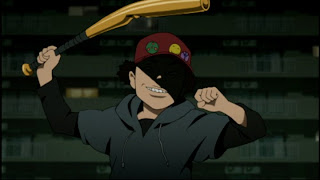 Ani-Gamers will be publishing a handful of messages from our bloggers expressing our personal reactions to the great loss that is the death of anime director Satoshi Kon. We begin with a brief post from anime/game reviewer Ink.

Ultimately, the inherent value of artists is what they manage to leave behind in terms of creative output once they shed their respective mortal coils. From directing and writing stories to taking part in the animation thereof, surely something of Satoshi Kon’s struck a chord with my soul. If not, I wouldn’t own a copy of almost everything with which he’s been involved.

In honor of Kon’s passing, I watched the first four episodes of Paranoia Agent (2004), a series that consistently stands out as one of the examples of anime I offer to any friend seeking segue into the world of Japanese animation. Kon’s ability to bridge genres lies in the fact that his work stands apart as potent film rather than frivolous serial. Even though Paranoia Agent is a series, it is structured via vignettes that showcase Kon’s ability to imbue disparate yet complete stories with a similar sense of desperation and resolution while collectively using them to build a complete statement on societal pressures and coping mechanisms. His feature-length animations — Perfect Blue (1997), Millennium Actress (2001), Tokyo Godfathers (2003), Paprika (2006) — further justify the man’s proficiency as a writer/director by rivaling the complexities of plot and character found in most of today’s live action films.

His works are some of the most outstanding examples of what anime can be when not bowing to the lowest common denominator and serve as a bar over which future animators, writers, and directors should aspire to proudly vault.