I'm getting older. (In fact, I'm older than I've ever been and now I'm even older.) This is pretty normal as far as I can tell, but as many folks have pointed out in the past few years, anime conventions aren't growing up with me. EDIT: After four days at Otakon, one of the largest anime conventions the United States, I realized that, at the tender age of 19, I was finally starting to feel the widening of this gap. The strangest thing of all, though, is that it doesn't really bother me very much.

Indeed, the theme of this year's Otakon seemed to be immaturity, as staffers at the massive Japanese pop culture event fought to contain epidemic shouting of popular memes such as "Buttscratchers" — a one-time joke from Family Guy — and "Marco Polo." Vuvuzelas, the strident noisemakers popularized thanks to their appearance during the World Cup in South Africa, were preemptively banned weeks before the convention even began. One attendee even pulled a fire alarm during peak time on Saturday for a laugh. Unfortunately, though, containment was a near-impossible task when Otakon's staffers were faced with thousands of teenage troublemakers, many of whom probably view memes as a way to make an impression on their fellow attendees and be a part of something bigger than themselves.

Naturally, most of the bloggers with whom I shared two adjoined hotel rooms for the weekend (including the Reverse Thieves, Carl Li, Scott VonSchilling, Dave Cabrera, Caleb Dunaway, Kyle "Lwelyk" LaCroix, and Patz) couldn't stand the immaturity of these kids and their memes. Truthfully, I can find no reason to defend their actions, but to me, they represent the continuing strength of the anime community, even when their "unique" form of comedy may fall on unhappy ears. 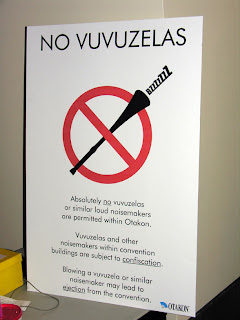 You see, the anime fandom is still growing. Attendance rises every year for many conventions — including Otakon, which saw an increase of nearly 3,000 members — even as Japanese studios deal with financial troubles, North American distributors close their doors, and fans grapple with the moral repercussions of pirating the content they enjoy. Anime fandom might not be moving in the ways that some its opinion leaders want it to go, but it's difficult to ignore the continuing flow of young fans coming into the medium.

That said, it's been a couple of years since I attended a convention from the perspective of an average con-goer, which is to say, without any preparation nor knowledge of the guests and their previous work. I was flying by the seat of my pants for the entirety of the weekend, which, though it was far from intentional, resulted in a refreshing experience. It also helped to highlight some of the unique challenges facing anime conventions due to their overwhelmingly adolescent audience. You see, most young fans simply aren't aware of the myriad Japanese guests Otakon brings to the convention every year (including veteran guest Masao Maruyama, founder of studio Madhouse). Last year I even wrote a post from Otakon 2009 about the need for more curiosity from newbie con attendees.

This year, when I saw nearly empty panel rooms with the creators of the new anime Rainbow (Hiroshi Koujina) next to hallways ringing with memes and lined with fans waiting for English dub actors' autographs, I didn't despair. I didn't get angry at these kids for being "bad anime fans." I simply saw it as a missed opportunity. And I realized that, despite my interest in Japanese creators, I too was, to some degree, ignoring these great guests, mostly because the "typical" convention experience simply does not include poring over the details of the con book. 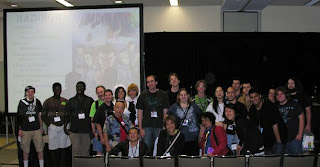 When I walk past young fans screaming annoying in-jokes at Otakon, I don't see the death of conventions. What I see are people who have an interest in this medium, but are not being given the correct tools to seek out more information. They are being sold an experience that is all fluff, all Vic Mignonas and pop idols and J-Rock pretty-boys. (Fluff is, of course, acceptable in limited quantities.) When I see packed rooms for panels about Japanese mahjong (run by Carl Li and Dave Cabrera), anime about cults (Mike Toole), and obscure anime (the Anime World Order podcasters), and hear spirited praise from surprisingly young audience members in my character design panel, it is clear that fans desire substance. Furthermore, large cons like Otakon deliver that substance in the form of big Japanese guests and an incredible variety of fan panels; they just fail to make a big deal about it. The director, producer, AND character designer of Welcome to the SPACE SHOW are certainly more important to fandom than a dub actor, so there is no reason why the latter should be the guest that gets more attention from the convention.

My Otakon experience, a unique one for this longtime convention blogger, has re-opened my eyes to the way the rest of the fandom sees conventions. Yes, screaming a tired, tasteless Family Guy line, blowing a vuvuzela, or pulling a fire alarm are all incredibly stupid things to do. Yes, they take away from my fun. Nevertheless, they are the icky things that remind us that fandom is still young, strong, and involved. Helping to engage it in more productive activities is, I think, the most commonly forgotten responsibility of anime conventions.