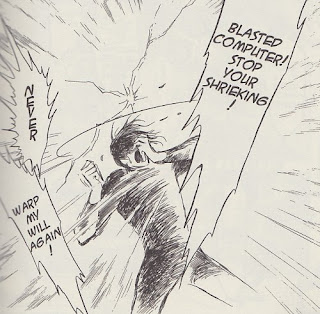 Note: This article assumes that you have already read To Terra, or at the very least have an understanding of the main characters within the story. If you go to Kate Dacey's compilation page for the To Terra edition of the Manga Moveable Feast you will find a wealth of reviews and other articles about To Terra that you can sink your teeth into.

While re-reading and chewing over To Terra for the now-passed Manga Moveable Feast, I found myself drawn to something I had not considered in such a concentrated manner previously: the upbringing of the characters and how this drove their actions in very different ways.

The majority of the characters are raised under the Superior Domination (SD) system, a computer-moderated society put in place to produce pure, productive members of humanity. With echoes of Brave New World, To Terra quickly introduces its chilling, dystopian social environment where children are planned and conceived by computer before being passed to foster parents and raised without knowing their true origin. 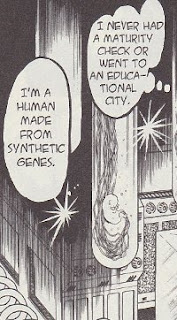 Once the children reach their 14th birthday they are taken unawares for a "Maturity Check", administered by a central computer. The Maturity Check functions as testing and preparation for the child's adult life, with some of the intricacies left unexplained to preserve the mystery of it. Sounds an awful lot like puberty, doesn't it? The main difference is that the Maturity Check doesn't cause hair to suddenly appear in new places, and if anything it makes the characters immaculately drawn hair even more lush. During this enforced coming-of-age the child is told that their childhood was a fabrication produced for the sole purpose of providing them with a healthy emotional background and that their early memories are to be wiped.

This forces an identify crisis onto the children, one which is intended to clear the way for training that will form them into pure subjects willing to work for and perpetuate the Superior Domination Order, with the aim of restoring the now-ravaged planet Earth under the guidance of the Mother Computer.

It is worth noting here that the phrase "Mother Computer" would, at the time that To Terra was written, have sounded utterly outlandish and more than a little disturbing. While computers these days are benign things you have on your desk, in 1977 the microprocessor had only recently been produced, ARPANET was new, and the CRAY-1 supercomputer was the machine to beat. This new technology would surely have had a vague air of magic and threat, and to hand over the most basic of human interactions — the creation and care of children — to such constructs would feel abhorrent.

Firstly, I want to focus on those characters in the story who I believe most closely mirror how "normal" people such as you or I would react in the SD system: Seki and Sam. Both undergo the typical SD upbringing and we meet them early on in the story as classmates of Keith Anyan on a educational station having recently undergone the Maturity Check. 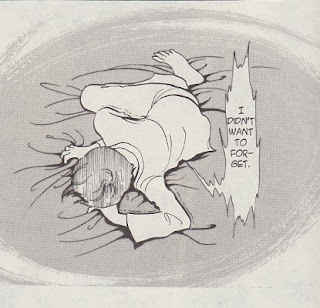 Seki is an intelligent child, though he is earmarked for greatness and is prideful and arrogant as a result. He is emotionally sensitive and coupled with his outspoken distaste of the SD order he is considered a troublemaker and, even worse, a potential telepath. The source of his discontent is very basic and understandable; Seki resents the SD system for stripping him of his childhood, clinging onto the angelic memory of his mother despite knowing it was a fabrication. This grief accelerates Seki's frustration with his situation playing second fiddle to Keith and causes him to act in an increasingly impulsive manner to try and assert himself as an individual and to validate his upbringing. These actions spiral out of control, eventually leading to his death. For being intelligent and sensitive, the SD order drove Seki to self-destruction, wasting a potentially world-altering person due to its deception.

On the other end of the spectrum, Sam is dead average. He squeaks passes in his exams, neither dissents or swears by the regime that produced him, and doesn't sweat the small stuff. His main responsibility is to his friends, and sticks by Keith through thick and thin. An upstanding citizen, he graduates with average grades and takes a job as a space trucker, something that sounds even more boring than normal truck driving. Through this job he comes to meet the Mu and in particular the main protagonist Jomy, who he was childhood friends with. Faced with a filthy telepath, Sam acts upon the information that the computer education has drilled into him and freaks the hell out, attacking Jomy in a fit of primal fear. Jomy is horrified how his old friend has been warped and over-reacts, causing a massive explosion and injuring Sam.

We are later re-introduced to Sam and find out that this encounter has left him crippled at a mental age of 14. All the ingrained fear is gone, replaced by a much more carefree outlook. While this may be a bit of a stretch, I believe that this shows that the overbearing influence of the Maturity Check, illustrating that the computer education had left Sam without the mental tools to cope with adult life. The shock encounter caused him to revert to a simpler time without the choking influence that had warped him into a form so horrifying to Jomy.

Jomy, the main protagonist of the story, also goes through the normal SD upbringing experienced by Sam and Seki, and like them he is abducted at 14 to undergo the Maturity Check. For him, however, things change when he is rescued by the leader of the Mu and made their new leader. Faced with so much responsibility and hostility from both the SD order and from his own people, it would make sense for Jomy to seek a return to the halcyon days of his youth, even while knowing that it was a fabrication. For the majority of the story he tries to bring happiness to the Mu by creating a stable home for them, free from the overbearing computerized system that hunts them.

Following a major tragedy Jomy finally heeds his predecessors' imperative to bring the Mu to their homeland of Terra and to destroy the computer system that is warping humanity.

The first step on this journey is for Jomy to put his own past to rest by attacking his old childhood world and destroying the computer that oversees the Maturity Checks there. It it only with the destruction of that machine that Jomy matures both as a person and a leader, shouldering his burdens and doing what must be done to save. Not just his own people from the oppressive Mother Computer, but humanity as a whole as well. 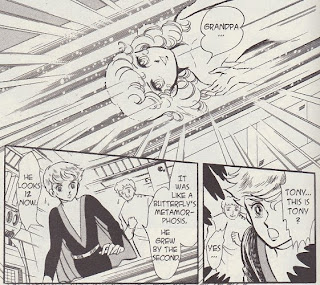 One of those burdens is Tony, who is the product of the first natural birth among the Mu, and an exceptionally powerful telepath. Brought up with utmost love and care by his mother Carina, he is overcome with grief when she dies. The resulting shock causes him to overreact and accelerate his physical growth in order to be of greater use to Jomy, the young leader who encouraged his birth and whom he now regards as his family. This change makes him as an abrasive, irritable person who is still very much a child emotionally, traits exaggerated by being the cornerstone of the Mu military due to his immense psychic power. This combination of personality and ability causes Tony and the few others like him in the Mu population to be treated as outcasts. They eventually leave the Mu to begin a dreamlike existence among the stars, having grown up too fast without the grounding to cope with the harsh reality they live in.

Finally, there is Keith Anyan, who is perhaps the most interesting of all of the characters in To Terra. Keith is the result of a more advanced version of the SD program — he is engineered to have a theoretically perfect genome and grown in a tank until 16 under the direct care and attention of the educational computer. He cannot recall his childhood, something which sets him apart from his school friends, and when he discovers the truth there is an initial shock at the confirmation but no great change or revelation takes place. This is, in my mind, because there is no subterfuge involved. Instead of having an illusionary childhood life stripped from him, Keith is left to ponder his existence as someone created for the express purpose of leading the SD order. While he does follow orders of the computer, Keith develops throughout adulthood, free of any anxiety or doubts lingering in his mind about his origins. In the end, it could be argued that Keith has the fewest issues with his childhood, primarily because he did not have one in the strict sense, and he had no other alternative but to adjust to his circumstances. He spends a large amount of time reflecting on the people he has met throughout his life, allowing these events to affect him rather than being a prisoner to his childhood and the computer overlords that he starts to question as time carries on.

With all this out of the way, what was Keiko Takamiya trying to say? I submit that the message is that there should be no lies in childhood, as this only causes mal-adjustment and traps people in a cycle of trying to reconcile reality with what they experienced and viewed as fact, thus stunting their development. In this story the computers are one thing used to provide and enforce this lie, but they could be swapped out for any real-life examples that you care to produce, such as an overbearing Nationalistic agenda. Even now, many years after publication, this message feels very relevant and lacking in due consideration, making the series all the more important to read and reflect on.