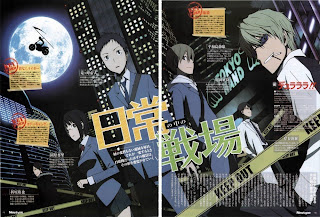 At their industry panel at Otakon 2010, anime studio Aniplex announced that they will be distributing their new 24-episode TV anime Durarara!! based on Ryohgo Narita's light novel series on DVD in the United States. The first part of the "High-Tension, Suspense Action, Mysterious and Totally Crazy Anime!!" will hit American shores on January 2011, with two more DVD sets (two DVDs per box) of eight to nine episodes each following close behind.

Following this already exciting announcement, Aniplex also revealed some of the dub cast for the series, while confirming that the DVD release will come with both dub and sub tracks. Celty Sturluson will be played by Kari Wahlgren (Haruko in FLCL), Ryuugamine Mikado will be played by Darrel Guildbeau (Satoshi in When They Cry), and Heiwajima Shizuo will be payed by Crispin Freeman (Togusa in Ghost in the Shell, Zelgadis in Slayers, Kyon in Haruhi). After some questioning from fans in the audience, representatives revealed that the Durarara!! OAV will be included in the DVD release, voiceover studio Bang! Zoom (Code Geass, Gurren Lagann, Haruhi) will be dubbing the show, and there is no guarantee of a box set until Aniplex finishes putting out the Japanese DVDs.

Interested fans can currently watch all 24 episodes of the recently-completed Durarara!! with subtitles on streaming video site Crunchyroll, though Aniplex did not mention if they would be taking down the streaming videos once the DVDs come out in the United States. (Aniplex has also put up an official site for Durarara!!)

At the panel, Aniplex reps also announced a Blu-ray release of anime franchise Read Or Die, featuring both the critically-acclaimed OAV and the television series of the same name.