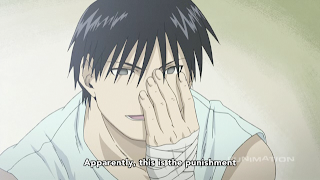 FMA1 has a reunited Assembly “reverse the Ishval policy and help them rebuild on their own land,” keeping the socio-political dealings with the Ishvalans relatively vague, which is understandable given the focus of the show is Ed and not Ishvalans. On the contrary, FMA2 shows Mustang legitimately boning up on anthropological issues in order to actively “solve this Ishvalan problem” before he becomes Fuhrer. So FMA2 goes into a little more detail not only about the plan — opening the formerly closed off areas and returning those living in slums to their holy land — but also in the portrayal of some of the backing effort needed to bring it to light. The ground gained through this specificity is lost morally, however, with the way in which Mustang chooses to accept Marcoh’s Ishvalan-made Philosopher’s Stone. He should have said he’d ask the Ishvalans if it was OK for him to use the stone to regain his eyesight to help their people, but instead Mustang intends to use the Ishvalan ingredients without the race’s consent for the greater good he imagines for them. He does recognize the faux pas as well as the subsequent affront the Ishvalans (as well as Ed) may take but decides to “use it anyhow.” He also uses it (supposedly, selfishly) to heal Havoc. And while we’re talking Ishvalans, I’ll mention the fact that FMA2 makes Scar more or less a diplomat for the advancement of Ishvalan integration instead of a martyr as in FMA1.

Treatment of Al’s body at the gate was always something portrayed differently between series. Whereas FMA1 used a vague “his body is still in there ... somewhere” approach, FMA2 makes it known relatively early on that Al’s body was waiting for his soul and eating itself alive with every passing moment. Thus the difference is a quasi-realistic portrayal of muscle atrophy in FMA2 when Ed and Al return to Resembool as opposed to the magically fully restored (sans memories), ready-to-go, 10 year-old Al of FMA1. Again, this is what both series do well. FMA2 tries to make its scenarios as realistic as possible to reap a naturalistic humanity, while FMA1 uses the fantastic to indulge the dramatic.

Speaking of homecomings, FMA1 had two, and both were vastly different from the one in FMA2. The first was that of the aforementioned restored Al. Though we don’t see how he got there, there is the fact that we see him with Izumi, Pinako Rockbell, et al at play and a family dinner type setting. It is at the latter when we see Al’s determination to go about learning alchemy in the hopes of getting his brother back. This finally makes Al akin to FMA2 Al via asserted individuality. The second is Ed’s arrival through the gate from our world. This one is so flooded with action, there’s little time to cry over Mustang’s devotion to depression over a missing Ed, Winry’s undying hope for Ed’s return ... sorry, got a little choked up just thinking about it. OK, so there was more than enough room for tears too. However, While FMA1 was waiting for the fantastic to happen, FMA2 makes a noble stride in the portrayal of Ed and Al’s combined homecoming by having the brothers go back home together as a fully restored pair. FMA2 plays up Al’s condition, Winry’s war wife walk to the front door (and subsequent tackling of the brothers), even the faithful dog ... and all those things combined made me need one heck of an absorbent tissue.

And I’ll say it: most appropriate wedding proposal ... ever! Although in FMA1, Ed and Winry never managed to consummate their mutual attraction/devotion — duty always called Ed away and Winry was forced to be always at the ready for him — it was always there in subtext. FMA2 however, true to its stronger character development, has the love formerly unspoken betwixt characters be issued outright and then make the characters still go their separate ways (to be reunited at least enough times and with enough time to have kids). Awwww.

A human mother raising a homunculus son is also a similarity of both series’ endings. FMA1 has the Rockbells take in Wrath, and FMA2 has the Fuhrer’s wife (re-)raise Selim. The difference is that FMA1 sees fit to just leave Wrath installed as a rogue family member unit (the angsty teen, if you will), who eventually comes around to save Al and further the story by sacrificing himself (not altogether selflessly). FMA2, however, uses the “adoption” as an experiment, monitored by the state, to see if homunculi can be raised to peacefully coexist with humans. This, again, emphasizes (if not directly embodies) FMA2’s dedication to the socio-political ... especially as there is very little emotion in the scene when the government threatens to kill him if he ever shows signs of stepping out of line.

That’s it for the episode blow-by-blow! Of course there have been many slight differences throughout this series’ run that I never touched upon, but that was only because there have been so many more juicy and thought-provoking differences that pleaded for pontification. There’s one final diary left. I’ve (overly) indulged in the analytical up until now, but the next diary will be my thoughts on both series overall, taking into account aspects both personal and logical.