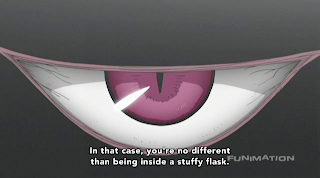 Watch Episode 63 – The Other Side of the Gate

What equates to Ed’s final boss battle concludes with an implosion that brings Father back to the gate. There, free from their oppressive circle, Yin dot (dwarf in a flask homunculus) fights Yang dot (the world, god, etc.), and the two have an after-school discussion about self-esteem and selfishness ... about how separating oneself from one’s emotions does not a more perfect creature make. That may sound harsh, but really, FMA1 is no better. Its boss battle, betwixt Ed and Dietlinde Eckhart aboard a jet creeping with soldiers infected with truth, shamelessly and blatantly blurts out how hate is derived from fear and that intrigue leads to envy which leads to suspicion and fear. “It’s human nature. We can’t accept what we don’t see in ourselves. We fear it, reject it. And that is the beginning of war. When I look at you, I see a beast. That is why I can take your life.” Both series are equally heavy-handed in the delivery of their morals via talkative confrontations, and both ironically blame the lack of understanding about relationships on the outside world.

After re-watching the final “episode” of FMA1, there is a partial line of dialog between Ed and Eckhart that describes the motive behind the desire for inter-dimensional conquest – “obsessed with any world but this one” – that, while trapped in the FMA1 universe, very nicely applies to both series. Ed and Al in FMA1, as well as dwarf in a flask homunculus in FMA2, never seem content to grow within the world at hand. The characters always seem to search for something better, out of desperate hope or pure greed. The difference is that FMA1 rewards its truth-gluttons due to their sacrifices, while FMA2 strikes down its transgressor because of his insensitivity to the world at large. Both stay true to their series, with FMA1’s focus on helping others at any cost and FMA2’s focus on the undeniable participation and personification of the one-ness of the universe and everything therein.

FMA2 Ed draws a human transmutation circle similarly, though not nearly as elaborate as in FMA1, to get Al back. The difference in circles is superficial but can be explained by the circles’ respective purposes: transportation to the gate and human sacrifice. What’s sacrificed is also interestingly similar and dissimilar. At the end of the FMA1 series, Ed sacrifices himself and brings back Al, who returns to the flesh sans memories of all the years that have transpired since the brothers tried to resurrect their mother. In FMA2, it is Ed that gives up the intangible ability to perform alchemy, his own inner gate, in order to restore Al to the proper space-time continuum.

Along the same lines, FMA2 Ed physically brings Al back from the gate, as opposed to FMA1, where Al is restored a parallel dimension away from his sibling and later has to sneak back into his brother’s life. FMA2’s scenario shows an older brother fulfilling his promise and selfishly being able to reap the benefits, while FMA1 shows an older brother who is selflessly moving on under the auspice that he probably brought back his brother in another world and they are both continuing with their lives separately. So, true to their natures, FMA1 showcases inseparable brothers to make the end separation (and subsequent reunion) all the more dramatic, and FMA2 uses the distance between the brothers to make them stronger characters and to make the rescue seem smarter. Both, however, show a great growth in character via sacrifice.

Some last minor but mentionable differences include Mustang succeeding the Fuhrer in terms of duty (unclear in what position), while FMA1 has him demote himself and return to enlisted man status to serve his country in humble fashion. Also, Hohenheim does not die in the jaws of a permanently transformed talking dragon named Envy as in FMA1, but kneeling at his wife’s grave. This results in a touching sight and suitable end that befittingly contrasts FMA1’s dramatic sacrifice.