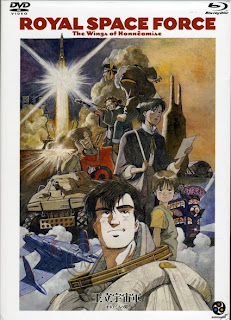 Before Gurren Lagann (2007), before FLCL (2000), and even before Neon Genesis Evangelion (1995), now-famous anime studio Gainax created a film that served as their explosive debut into the anime world. Ironically, however, the film is far from explosive, with its quiet, contemplative look at space travel that shatters common perceptions of anime science fiction as action-heavy fare. Gainax has come very far since Royal Space Force: The Wings of Honneamise (1987), but it's clear that the trails of the studio's science fiction lineage spring from this film.

Wings of Honneamise takes place in a brilliantly imagined science fiction world where manned spaceflight is nothing but a pipe dream for the people of Earth. Shirotsugh Lhadatt (a fascinating combination of different languages) is a lazy member of the "Royal Space Force" of his home country of Honneamise. Ironically, the Space Force doesn't actually do anything but pose around in silly costumes and talk about the possibility of space flight, thus drawing the ire of both the people and the government of Honneamise.

But all of that changes when Shiro meets a girl named Riquinni Nonderaiko on a street corner as she hands out pamphlets about her religion, begging people to believe in God during these turbulent times. After discussing space travel and what it might feel like to leave the sins of Earth behind, Shiro is inspired to volunteer as the world's first astronaut. Unfortunately, as the rocket nears completion, the government begins to twist the original intentions of the project, attempting to use it to start a war with a rival nation.

Wings of Honneamise consistently ranks among one of the most beloved classic films in anime history — to the point that Bandai Entertainment America's top-quality DVD label is called "Honneamise." It's not a surprising position to hold, since the film is definitely a very poignant rumination on humanity and our relationship with technology and each other. Unfortunately, Honneamise is also the first major project from a brand-new studio, and it shows.

Now Gainax has always been known for their acute sense of aesthetics, and Honneamise is no exception. Despite the fact that this was their first project, the cityscapes and visions of civil unrest are at times comparable to scenes from Akira (1988), a film that was released a year later by the larger, more established Tokyo Movie Shinsha. When nothing exciting is happening on screen, there can be a noticeable drop in the framerate, but whenever an exquisitely animated piece of technology shows up, it's hard not to pick up on the love that the animators put into this project.

Such an attitude carries over to nearly every facet of this film. It is, without a doubt, a sci-fi flick made by fans for fans, with its lingering shots of engines and planes, and meticulously thought-out alternate universe (spoons are triangular, books open upwards, etc.). An unfortunate symptom of this inordinate time spent on presentation is that Honneamise is just too slow. It plods along, throwing some genuinely funny little moments between Shiro and his friends, but rarely shows anything — besides a botched assassination attempt — that gets the blood pumping.

Nevertheless, once it all comes to its powerful climax during the launch sequence, the entire first part of the movie is forgotten. This is what everybody has been waiting for — the characters, the audience, and yes, even the animators. The launch has a feeling of release, as the dreams of not only Shiro and Riquinni, but also humanity itself, are fulfilled. It’s a soaring, achingly beautiful climax, reminiscent in certain ways of many of Hayao Miyazaki’s most brilliant flying scenes. (1992's Porco Rosso being the most immediate comparison.)

In that moment, Honneamise is a surprisingly powerful film. If you ever dreamed of going to space as a kid, dreamed of staring back at Earth from hundreds of miles above the surface, Honneamise is a movie that is built for you. It is made by people who feel a childlike excitement at the thought of space travel, and their love for the subject shines through in every line of dialogue and every cel of animation. While not always a confirmation of technical skill or directorial vision, Wings of Honneamise stands among the few animated films that truly deserve the cliché of being called “triumphs of the imagination.”

This review is based on a DVD borrowed from the Rensselaer Sci-Fi Assn. anime library.