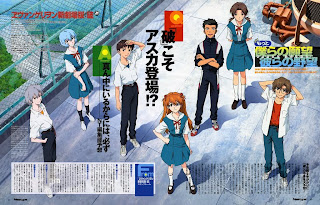 Before I get into the review proper I want to bring up a conflict of interest that I feel is important for readers to bear in mind. I am a massive fan of the original Neon Genesis Evangelion TV series, and as such am predisposed to enjoy this movie. I will try my best to put aside my preconceptions for the purposes of this review, but I wanted to point out this potential bias at the first instance. I consider it only fair to do so.

Like the first film, Eva 2.0 is a reimagining of the original Neon Genesis Evangelion TV series which follows the exploits of a small group of teenage pilots conscripted to fight in massive humanoid weapons (Evangelions) against monstrous creatures hell-bent on destroying humanity (Angels), and how they cope with this crushing responsibility. You can read an excellent review of this first installment by Uncle Yo on Ani-Gamers here. In the case of this second film, there is a large twist applied to the events from the series, which allows the film to emerge as its own fresh creation. The beloved core of the characters, robots, and events are still there but with refreshing changes: fat is trimmed, plot elements are tidied up, and entirely new material is added. In fact, those expecting a straight-up remake will find that the film will play on your expectations and fake you out to great effect, although thankfully these hints are packaged in a way that do not run the risk of wrecking the film for someone new to the franchise.

The extraneous elements removed from this adaptation are many in number, but none are worth mourning the loss of. The main beneficiary of this trimming is, rather surprisingly, the quieter moments in between the massive robot battles which have greater deal of clarity and impact due to the tighter writing. In particular, the fluctuating relationship between Shinji and his father is explored in a new depth, making it a much more tangible element in the storyline than simply a sterile case of “whiny brat hates his asshole dad.” One downside of this compression is that the relationships between Shinji and Rei/Asuka lose much of their subtlety. At some points the movie feels like it has switched genre to a harmless harem comedy show following a love triangle of socially useless robot pilots.

The film itself looks utterly amazing, with almost mind-wrecking detail lavished into the art and the robot models in particular. The Angel designs have had a complete overhaul and some pivotal examples have been re-worked with almost sick levels of care. The fights themselves sport amazing CG animation and are utterly engrossing in how they are presented for the most part — unlike other recent films that shall remain nameless. You can easily follow the fight and appreciate the overall tide of the battle, drawing you in. Fans of the original, who may think they know how every fight turns out, will be met by some surprising variations that keep the film feeling fresh and punish you for assuming that it is merely a remake of the original series. While the music during the quieter moments follows the previously used themes and leitmotifs from the TV show, the fight scenes have an all-new pulse-pounding score that amplifies the impact of the action to explosive levels.

It’s not without flaw though — there are times when the movie loses its way and forcibly ejects you from the experience. Most notable of these is the entirety of the first fight scene, which feels very roughly conceived and edited. You are introduced to a new character, mecha, and setting, but are never given time to absorb and appreciate what is being shown on the screen. I, for one, have no clear recollection of what the new Evangelion featured in this battle even looked like! One particular gripe, and one I assume will be fixed for the DVD/BD, is that most of the characters in this scene speak in mumbling "Engrish" at a level just barely louder than the surrounding battle. 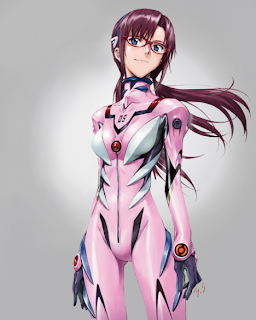 Thankfully this poor presentation does not infect the rest of the film, but then neither does the newly introduced character. Strangely, she only appears and interacts with the principal cast twice for the entire rest of the film. While the things she does are important to the overall plot, you can’t help but feel that she was roughly shoehorned into the proceedings by an over-eager intern who would burst into meetings waving his new character design around. I imagine him saying something like:

“Duuuuuudes! You gotta include her; she has glasses and a ponytail! Plus, she has a bigger chest, so we can use her for the trademark Gainax Bounce!” At which point everyone cheered and went out for a round or five of drinks.

When they got back from having nine drinks each, the staff set to work on my personal pet peeve of the entire movie: CG people in the background of scenes. It wrenched me out of the film entirely to see tiny, stiff polygonal people from Quake 2 stuttering in the background of scenes that needed to include some humans for atmosphere. I hope they fix this for the inevitable revised version as in this theatrical version it looks just plain cheap and nasty.

These small flaws are all utterly forgotten, however, in the exuberant blur of activity that is the last 30 minutes or so. At this point the movie stops joking around and ramps every setting it can up to 11, utterly destroying any doubts you may have had festering about the film or the direction of the series overall. In remaking what was already a pivotal part of the original TV series, the creators went all out in providing a mind-blowing ending that left the cinema audience cheering through the end credits. I dare not spoil a single second of it, but I implore you not to leave your seat until after the credits are done or else you will miss the single craziest thing of the entire film, one which bodes well for the two that are to follow. I already can't wait to get my hands on the Blu-ray version so I can see it all again.

This review is based on a theatrical version of Evangelion 2.0 shown at the London BFI Cinema as part of its Biannual Anime Weekend. Admission and all related expenses were paid for by the reviewer.