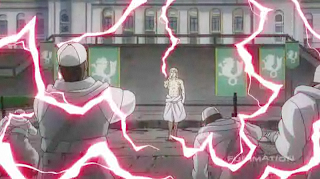 Hohenheim standing up to Father in this episode is akin to his FMA1 counterpart denying Dante. While FMA1 has Dante gain the upper hand in a more or less one-on-one fight and banish Hohenheim to our world to set up a stage for something greater later on, FMA2 uses Hohenheim’s power to strengthen the ultimate anti-Father force, representing wisdom that only comes from a combination of experience, regret, and penitent resolve. Respectively, FMA1 and FMA2 use the boys’ relationships with Hohenheim to highlight drastically different intentions of emotionally selfish sacrifices and battle-appropriate ones.

FMA2’s Hohenheim is given the role of comrade-in-arms to Ed and Al as opposed to a father figure ... at least by Western standards; Japanese culture might see Hohenheim’s actions as very fatherly (emotionally separated but present and protective). This enables the building of a strong bond betwixt him and his sons by requiring more constant interaction and alliance. However absent and emotionally distant he is from his boys throughout the majority of the series, FMA1 Hohenheim is the perfect Western father: letting his kids become themselves by themselves while looking out for them on the sidelines. Also, his final sacrifice in opening the gateway back to Amestris from Shambala is the ultimate parental sacrificial apology.

FMA2 has a nice FMA1 moment wherein Father brings back the dead most meaningful to his opponents’ sentimentalities (King Xerxes for Hohenheim, a baby for Izumi), but it lasts all of a minute or so. This is hardly enough to conjure the emotional impact of FMA1’s homunculi, but the event does serve FMA2’s greater purpose of tactical maneuvering. Using the shock of seeing these lost loved ones, Father tries to wipe out his opponents in a very strategic sucker punch.

Alphonse’s protection of May bears a heftier toll on his metal shell than did the effects of animating a soulless Nina doll in FMA1, but either way the erosion of his temporary body bends Al’s mind to self-sacrifice. The difference is intent. FMA2 Al, knowing his own body cannot fight and his soul is in danger from cracks in his own shell threatening an already all-too-exposed blood seal, has no choice but to give his soul back to the gate in trade for the return of Ed’s arm so that Father can be brought down. While this act has a sense of indebted brotherly loyalty to it, the sacrifice is made for more tactical gains than out of love (he expects Ed to come back for him). FMA1 Al’s sacrifice was done so out of pure brotherly love and the loneliness of a character that was truly missing his other half ... not to mention that Al never expected to see Ed again.

All illustrated via posturing, I rather like the way FMA2 shows Ed and Al to be components of their father’s personality ... perhaps even paralleling the offspring of Hohenheim to the homunculi created by Father. This comes into play particularly when we see Al posed to protect May from Father’s blast and Hohenheim similarly posed to protect Izumi. FMA1 Hohenheim is always a source of emotional tension, whether it is the hatred stemming from abandonment or Ed’s hatred of himself for slowly forgiving his father despite his actions. In either case, Ed never seems to be his father. However, FMA2 Ed, after regaining his body, takes on Father in a show of alchemic talent equal to displays we were privy to in Hohenheim’s underground battle with the same.

Hooray for humans! Though naught but an insect bite to Father, regular human soldiers play a role in their own destinies by diverting Father’s attention and coming to the aid of the alchemists in an all-inclusive battle. This comes into play in two ways, via Briggs forces fighting Father directly and from Alchemist-aid Hawkeye acting as Mustang’s sight (pun fully intended). As I hoped, FMA2 continues its theme of humanity (civilian, soldier, alchemist, chimera, host) vs. monster (homunculi), which as previously stated contrasts FMA1’s strict alchemist vs. monster M.O.

Speaking of hosts, all Greed wants is friends? I mean, of course he wants friends; Greed wants it ALL, which would include friends. However, all that Greed wants for is not friends. Weakest homunculus motive ever, especially for one hell-bent on world domination. What is this, some opinion that all wannabe despots want to be is loved and through love can unite the world in friendship? This human sentimentality sounds very cheesy and out of character. And while that may sound like FMA1 homunculus territory, it’s not. FMA1 homunculi, tormented by trace memories of the people the alchemists were trying to bring back to the world, resented and rebelled against such sympathies and tried to kill those affiliated with them.