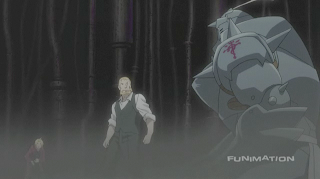 Watch Episode 61 – He Who Would Swallow God

Of course an obvious difference in this episode is that Bradley dies (please pardon the pun) at the hands of Scar in FMA2 instead of Selim’s misguided compassion and Mustang’s vengeful alchemy in FMA1, but the subtle difference (and even more subtle similarity) is how the Fuhrer’s deaths represent the nature of both series.

FMA1 has Mustang finish off Bradley at his mansion more or less in the presence of his own (adopted) family. The bane of Mustang’s political aspiration and target whose death would serve to avenge Hughes’ death, Bradley represents two final hurdles for Mustang: those of acquiring the throne to change the country for the better (miniskirt army!), and the resolution of a deep personal conflict (the loss of Hughes). The former, minus the miniskirt army, is more of FMA2’s territory, and it shows. Before he attacks Bradley, FMA1 Mustang runs into Ed and makes it known he has no chance at performing a coup and retaining the favor of the people thereafter. Thus FMA1 rather brilliantly puffs out its chest and says, “I’m all about my feelings, and the Fuhrer’s gonna pay for dropping my best buddy.” The emotional motivation trumps the political.

Surprisingly, FMA2 pitting Scar against Bradley does have a similar emotional edge, that of retribution for all but succeeding at Ishvalan genocide. However, even that motive is more politically poignant than dramatic given FMA2’s constant integration of racial themes. What makes the battle personal is Bradley bringing up Scar’s heretical acts of alchemy, and then Scar’s use of the intense light only experienced during a solar eclipse, the alignment of which is likened to God in the series, to blind Wrath while he carries out his attack on Scar’s faith. (Can you say, “awesome”? Good. I knew you could). Emotional ties also rear themselves in the form of a sort of reverence for Scar’s brother’s alchemic research via inner monologues from Scar when the battle is concluded and he emerges as victor. But even this revelation is used for strategic gain as opposed to emotional resolution.

Reasoning for Father’s moon-lust is given via a flashback to Ed and Al’s early days of alchemic study against the juxtaposition of the currently occurring lunar eclipse. Well-used Romantic imagery aside, the pace at which FMA2’s logic jump exhausts itself (seemingly ... there can yet be more) pales in comparison to FMA1’s use of a parallel reality. Whether or not you cared for it, FMA1 stuck to its decision, plausibly tied it in with its existing world, and used it for all it was worth throughout the final episodes and subsequent movie. So far in FMA2, Earth has no moon because it was swallowed by a dwarf who lost the power to keep it down but is still fighting the hiccups (or at least shows signs of it early on and then seems to be A-OK). Inconsistency would be the named difference here, but, there’s an odd consistency between series as well. Slight though it may be, the similarity is in the “all Amestrians are dead, oh ... now they’re not” sacrifice in FMA2, which almost frighteningly parallels FMA1’s “my brother’s dead, oh ... now he’s not” sacrifice in FMA1. But there are still three more FMA2 episodes, and a lot more can happen in that time, including poignancy.

There’s also something very worth noting in the way FMA1 and FMA2 deal with the relationship between Ed and Hohenheim. I’m not talking about the familial contempt, but the way in which FMA1 has Ed pretty much bat clean-up after the monster his father helps create in Dante (and is helpless against), and the way FMA2 has Ed pretty much sit on the bench as his father waits for the chess board to come into alignment with the vision he had 300 years ago (figuratively speaking ... or not). That is to say, at least in terms of battling the big guys, Ed plays only a very small part of a very effective team in FMA2 as opposed to the MVP he is in FMA1.