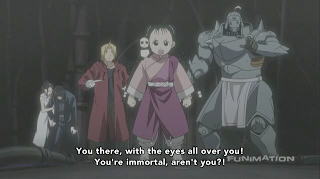 I wanna concentrate on brown-skinned people for a while. FMA2 has already used Ishvalans beyond their static representation in FMA1 ... or has it? In fact, the Ishvalan difference reflects the same overall theme that the other differences between any other aspects represent between the series: personal vs. political. FMA1 dealt statically with political strife suffered by the Ishvalans, but dynamically with the emotional pain of being ostracized and segregated both their people (even family) and spirituality (God), while FMA2 uses the brown-skinned, red-irised race to showcase the political ramifications of segmentation rampant throughout Amestris. Evidence for the latter includes overheard pieces of conversations from military lackeys and civilians alike who worry about Ishvalans amassing around Central, but sociological strife is wonderfully woven into this episode with a shot of a mother screaming in fear and protectively cradling her child while two Ishvalans very calmly ask her about something on a map. This can be seen as akin to the two children who looked at Scar as being a traitor to their people for having alchemic (heretical) symbols etched into one of his arms. But whereas FMA1’s example is intra-racial, FMA2 is interracial.

This brings us to something just as surprisingly different between the series, Scar’s use of full-blown alchemy. FMA1 restricted Scar from performing alchemy because he could not reconstruct as he only had one of his brother’s arms (or, if you’d rather believe, because he did not want to commit any further sin against God). This made his brother’s sacrificial gift of the alchemic ability of destruction Scar’s curse and driving excuse. In FMA2, a smarter Scar reads through his brother’s notes and adopts the heretical symbols onto his free arm because, as holds true for most of the characters’ intentions in this series, such an action might have potential strategic applications in foreseen and forthcoming battles. What this shows is humans learning, another theme throughout FMA2, and evolving to conquer overwhelming adversity at the cost of their own stagnant and unfounded moral viewpoints.

I haven’t commented on the animation in some time, but it seems to have been getting progressively better. It seems the more surreal the subjects, the better the detail ... or perhaps I’m just getting used to it. I have no inherent qualms with the increase of quality per se, but one note on the situation. Seeing as this is a series so focused on the struggle of humanity, it would be nice if some of the most beautifully animated scenes were applied to the regular human characters (not just those victimized in the Ishvalan War of Extermination). That being said, I love the image of Father climbing out of the Earth and howling at God (the moon), but this also brings up a difference between series: that of their conclusion-oriented jumps of logic.

FMA2 turns to the surreal while FMA1 turned to parallel reality. There’s much to be said for both. Many friends of mine were disappointed in FMA1’s sudden linkage with “our” world, a post-WWI Germany, saying it was wrong to get out of the world of Amestris and nullify or completely amend all the rules the series had fought so hard to make believable. FMA2 is certainly sticking with their world, but they’re making it almost hard to believe ... even by fiction standards. I can see the reasoning behind it, and it does fit in with the overall guiding philosophy of “one is all and all is one,” but the drastic increase of power, size, and scope of Father’s ambition seems to me just as desperate a cry for a big “wow, this IS shōnen” ending to rival the tearjerker FMA1 served up. But this is also a familiar cry, one I’ve heard friends and others complain about after seeing the introductory episode of FMA1 when it made its leap. I can only hope the reason behind the interplanetary aspirations of Father deserves as much clout as FMA1’s leap, where death (in all its forms), something Ed had feared since the beginning, in a parallel world, is the equalizing factor of transmutation and something he’d been ignorantly abusing all his life. It was a great dramatic blow to Ed’s psyche, and FMA2’s bigger-than-life homunculus master has its work cut out for it to top such a twist.