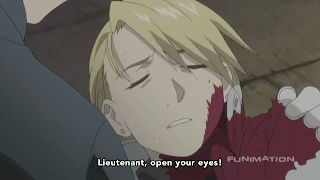 Mustang being pinned down in an alchemic circle at the mercy of Pride and Wrath is reminiscent of Philosopher Stone Al in the proverbial hands of Envy, Dante, and Gluttony in FMA1, and not only in posture. FMA2 Mustang and FMA1 Al are both going to be sacrifices, but the former is subject to it forcibly and successfully, while the latter actively overcomes his captors’ ensnarement in order to sacrifice himself for his own ends. These very acts show differentiation via struggle: FMA2 is very much protagonist vs. antagonist, while FMA1 uses that same initial conflict to segue into an internalized struggle over grief.

Another similarity and difference take place between series with Mustang’s anguish over whether or not to perform human alchemy to save Hawkeye. Taking into account the comparison made above, FMA2 Mustang, like FMA1 Al, has to consider using a Philosopher’s Stone in order to save a person he loves from dying, which he can only do by sacrificing his resolve and morals not to mention his entire possible existence. While FMA2 Hawkeye is alive and FMA1 Ed is freshly dead (“there’s still color in his cheeks”), the motive of self-sacrifice for a loved one prevails in both scenarios. The difference is that FMA2 has Mustang deny his emotional impulses because of guiding glances given by Hawkeye, whereas FMA1 Al goes through with his own sacrifice based on emotions stemming from his determination to make his brother whole again (and because Al can’t plausibly live without Ed anyway in that series).

Slyly defining the homunculus versus all aspects of humanity theme, Wrath delivers a wonderful rant: “Who will take down the Fuhrer of Amestris, and claim fame for themselves? A chimera? The outsider? Mustang’s dog? Or perhaps... (camera focuses on Scar) you’ll all come at me at once?” Not only does this show the clear faction divisions within the heroes, but it shows the diversity of peoples whose only bond is their humanity. In order, the Fuhrer starts with those that are only partly human and part creature (chimeras); then moves onto someone not even from the country who shouldn’t have any particular care about this whole affair (May); then points out the opposite with Hawkeye, who’s directly involved at both personal and military levels; and ends with a representative of a people who have been unjustly treated and assimilated by the state they’re now trying to improve. For such a short rant, it says a lot, and might also serve as a lovely bit of metaphorical foreshadowing.

Lastly, FMA2 Al rejecting his human body at The Gate to continue to fight as a living piece of armor in order to try and help save his friends is a choice never offered in FMA1. This rejection of his own self-fulfillment, however, is again like and dislike his FMA1 counterpart’s decision to sacrifice himself. It is alike in that both Als reject the possibility of regaining the body which they so desperately desire. FMA1 Al does it, as mentioned before, for the sake of bringing back his brother from the dead ... a full-on self-sacrifice. Very pure, very emotional ... damn near broke my heart when I watched it (followed by a little laugh and “oh come on,” when Ed turned around directly and did the same for Al). FMA2, always battle-wise, has Al assess the body he’d regain, realize where he’d regain it (Father’s lair), and then discern it as a tactical disadvantage that would lead to certain death. This is a stronger sacrifice in terms of selflessness and depiction of the choices of a well-developed character, though the FMA1 fan in me would have loved to see scrawny naked Al plopped into the middle of the battlefield for Ed to have to protect.