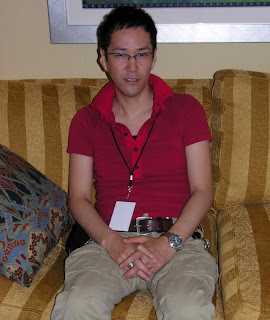 At AnimeNEXT 2010, Ink and I had a chance to sit down among a number of other members of the press from outlets like Japanator and Reverse Thieves for a brief question-and-answer session with Japanese anime director Kenji Kamiyama. The creator is best known for his work as animation director on Jin-Roh: The Wolf Brigade and series director on Eden of the East, Ghost in the Shell: Stand-Alone Complex, and Seirei no Moribito.

Special thanks go out to Kamiyama-san and his translator as well as Gregg Turek and Lindsay Schneider of AnimeNEXT for their help in setting up the meeting. For clarity, the following responses have been edited, changing the translator's third-person perspective to a first-person one and improving grammar where necessary. Our questions were chosen from a list compiled by me, Ink, and Uncle Yo.

Ani-Gamers: Mamoru Oshii was your mentor. As the director of Stand-Alone Complex, what was it like to create such a large-scale follow-up to the Ghost in the Shell film, which is arguably Oshii's most important work?

Kenji Kamiyama: People ask [me] that question a lot, and everyone asks me if I got a huge pressure, but I actually really enjoyed it, and it wasn't stressful at all. It was like making my own style from Oshii's work.

AG: I can't help but notice a lot of American culture reflected in your works. Do you have any favorite American movies or directors?

AG: Your works feature characters who are older and deal with a lot more mature issues. Do you think anime featuring these types of characters will gain popularity and help bring more mature viewers to this kind of medium?

KK: Yeah, I think so. I like to make a character something just like you, but also put some hope or something I [want] to be, so you can [feel] a longing [for] the character.