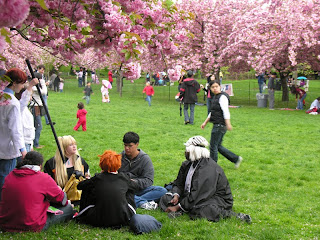 The sun beams fiercely on the Brooklyn Botanic Garden, and even as evening approaches, the humidity is relentless. Backstage, costume makers prepare to show off their best to a circus tent loaded with strangers who share their eccentric hobby. I glance over my opening speech one last time before noticing a veteran cosplayer sweating bullets through her eye shadow, shaded cheekbones and full-body jumpsuit.

Though she has been modeling her homemade costumes for over six years, earning over thirty awards from conventions across America, Caitlin Beards is sweating through her skintight pleather and spandex one-piece. This is her one-hundredth costume to date, and she has poured three months of her skill into sculpting the seven yards of metal chain and the eighteen-inch tall wig strapped to her head to become the video game heroine Bayonetta. Beards, like many others, belongs to a previously underground sub-culture of geeks that has blossomed in recent years.

The selected nineteen cosplayers standing with me under the tent are accustomed to posing for photos at conventions, but never for an audience of magazine and radio personalities, and never after having their make-up applied by personnel from MAC Cosmetics. For the first time in New York’s history, fashion-centered video game and Japanese anime fans have been pampered and prepped by internationally acclaimed make-up artists. 2010 has so far marked a new step in public exposure and professional treatment for cosplaying, and the community is still rising in the public eye. The hobby of cosplay is easy to explain but difficult to execute: it is the act of dressing like your favorite character from a TV show, movie, video game or comic book. In some social circles, cosplay is a competitive sport, to others it is a challenge to prove their sewing skills, and for some it is purely for fun and an excuse to meet other fans. Cosplay was arguably birthed at Star Trek conventions, where Trekkies posed as Starfleet officers, Klingons, and Vulcans alike to display their fandom. It was taken to a competitive level in Japan and spread itself worldwide through anime conventions. The hobby latched on in America in the early nineties, but skyrocketed with the domestication of the Internet. Dedicated cosplayers create online personas and profiles on forums to display their various fashion innovations, using materials from sheer linen to duct tape to altered Armani suits.

For the past three years, I have been touring anime conventions with attendance numbering anywhere from a few hundred to over twenty-four thousand. One of my recurring roles as a convention guest is to host a quintessential event: the cosplay masquerade. The largest event I ever hosted was at Anime Boston this past spring. Initial performance submission was so massive that the lead coordinator filtered all entries just to narrow down to forty performances that would fill the three-hour time block. Convention attendees waited outside the main events hall for hours beforehand, hoping for a spot in a room that fits five-thousand, or the spillover room that accommodated another thousand using state-of-the-art video equipment. The convention itself boasted a new record high of attendance of nearly seventeen thousand, despite being held during Easter weekend and competing for its audience with the Penny Arcade Expo East, the largest video game convention on the East Coast to date, which was held the weekend before at the same convention center. It seems neither recession nor religious holiday can deter us nerds.

Cosplay is rapidly blossoming under the public eye in New York, because while the anime industry is evolving from DVDs to streaming websites like Crunchyroll and Hulu, convention attendance (and with it, cosplay exposure) is on the rise. Interest in cosplay has taken hold of a younger, more ravenous generation of anime fans, and with new anime series coming over every season from Japan, the fans are increasing their efforts to respond. The New York Anime Festival, held each fall at the Jacob Javits Center, saw its attendance increase dramatically in its first three years. Between 2007 and 2008, Reed Exhibitions reported attendance swelling from fifteen to eighteen thousand, and for its third straight year, attendance capped just above twenty-one thousand. The event has such immense interest behind it that now corporate sponsorship has moved in to reward the elite cosplayers. At their headlining competitive cosplay event, the winning team is handed a free trip to Japan, which is quite impressive compared to a dollar store trophy and a boxed set of Hayao Miyazaki DVD’s.

New York’s dense population and entertainment industry help stoke the flames of cosplay awareness and provide the perfect environment. Just by Bryant Park is the largest Japanese bookstore, Kinokuniya, spanning three floors, the top one dedicated to Japanese comic books and art books from anime. Other stores such as Image Anime by Penn Station, often hold holiday competitions and offer prizes, which only encourage fans to come out of the woodwork to present costumes they have worked on for as long as three years. These constant events are pulling together a community regularly enough that the experienced can now mentor and encourage the newer fans, not to mention trade off cosplay war stories. Cosplayers now gather for regular public outings in places like Central Park and karaoke bars just to meet up in and show off their newest costume designs. Some go for realism, some for sight-gags like “cross-playing” (dressing as a character of the opposite gender), but all have a great time doing it.

Events like the Japanese Cherry Blossom Festival (a.k.a. Sakura Matsuri) at the Brooklyn Botanic Garden and the Japan Society may be elevating the public’s knowledge of cosplay as serious business. Only two weeks after the Fashion Show at the Botanic Garden, another major cosplay event has been scheduled: a competition at the Japan Society, right nearby the United Nations building.

As I prepare to host and present the participants, I see someone standing off in the stage wings: a young girl, fifteen at most, wearing her first cosplay. Even with the eight-foot Styrofoam sword slung over her back, she is shaking noticeably. She’s worried the audience will notice her wig’s ponytails are too short, or the crude stitching around her foam armguards. Moments ago, she approached me backstage and asked to be pulled from the masquerade due to her stage fright. I asked her what her character would do in the face of fear; since she is dressed as a demon-slayer, she might as well play the part. Her eyes grow in reassurance and realization, almost to the Bambi-eyed ratio of the comic book character she portrays. I wink from the podium and announce her name as she steps into the light confidently: a new cosplayer is born. And the tradition goes on.