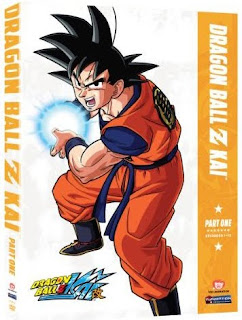 Dragon Ball Z kids, you know who you are. The generation that came home from school every day excited to watch the ongoing adventures of Goku and friends may have grown up now, but Toei's classic adaptation of Akira Toriyama's smash-hit shōnen manga remains a staple of fandom for many anime fans. Of course, before going any further, I should mention that I too was one of those exuberant DBZ kids. (In fact, before making Ani-Gamers, I once created a stupid DBZ fansite filled with photos, episode summaries, and ridiculous made-up power level comparisons.)

Despite the widespread love for Dragon Ball Z, though, many fans who have returned to the series since watching it as a child have found it to be tiresome and plagued by filler episodes (made to hold off production of the animation so there would still be manga content to animate). Enter Dragon Ball Kai, Toei's 20th Anniversary revival of the original TV series. Unlike many other anniversary projects, however, this is not a new series based on the same basic plot (like the 2003 Astro Boy series), nor is simply remastered footage (like the DBZ "Dragon Box"). No, Dragon Ball Kai (christened "Dragon Ball Z Kai" in North America) is, in a way, a "director's cut" of the original Dragon Ball Z, with remastered footage, new sound effects and background music, re-recorded dub tracks (in both English and Japanese) and — perhaps most importantly to many grown-up fans — all of the filler cut out. 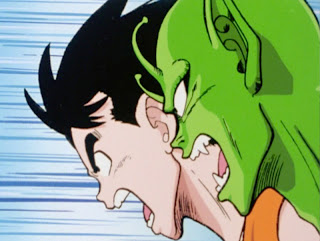 The story of Part 1, which features 13 episodes about the martial artist Son Goku and his allies as they fight off an evil alien race called the Saiyans, moves along at a brisk pace, with barely any of DBZ's trademark scenes of laborious power-ups and staring contests. In fact, the 13 episodes of the first DVD set cover the events of the first 30 episodes of the 1989 Japanese TV broadcast, setting a pace that nearly matches that of Toriyama's manga. Granted, there are a few scenes not depicted in the manga, such as a brief moment of comedy when the Saiyan Nappa scares away a news crew, screaming, "I hate the media!"

Furthermore, Kai includes new opening and ending songs from Tanimoto Takayoshi, called "Dragon Soul" and "Yeah! Break! Care! Break!" respectively. (Beware of the awkward — yet thankfully optional — English versions of the songs included by FUNimation!) Fans of the recent Dragon Ball video games might also notice flashy new eyecatches and opening/closing animations, which I assume were drawn by the same team that creates the art for games like the Budōkai Tenkaichi series. 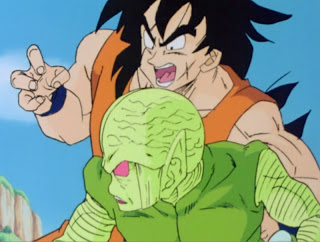 FUNimation's new dub (presumably made up of all new audio) sounds scarily accurate to their fantastic original, which was recorded over 10 years ago! However, the folks at FUNi have clearly made a concerted effort to appeal to hardcore anime fans this time, with frequent uses of mild profanity ("damn," "hell," and the occasional "bastard"), untranslated attack names ("Makankōsappō" instead of "Special Beam Cannon"), and a subtitle track with a notably different, more accurately translated script. Clearly this is a release for the kids who grew up on DBZ and have now grown into older otaku with the disposable income to buy a fan-centric re-release. Considering this, it's surprising that the DVDs have no special features beyond textless openings and closings, but such is the state of the struggling anime industry at the moment.

Most importantly, behind all of the great modifications from both the animators at Toei and the folks at FUNimation, the backbone of Dragon Ball Z is still surprisingly strong, even two decades after its Japanese TV release. Toriyama's unforgettable characters and trademark slapstick comedy are still an absolute joy and the action scenes have a quickness and a sense of power that served as the inspiration for many modern shōnen fighting anime. What's more, there are actually some really great-looking pans around characters in the show, notable for their fidelity despite being drawn entirely using cel animation on a weekly TV budget. Unfortunately the anime version fails to fully bring out the beauty of Toriyama's exquisite sense of shot composition, though it makes some noble efforts in many of the fight scenes. 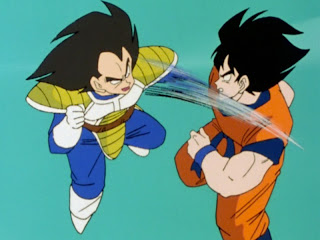 All in all, Dragon Ball Z Kai is well worth the $50 for anybody with an interest in experiencing the joy of DBZ all over again. It distills the best qualities of the show through improvements to its visuals, sound, pacing, and top-notch English adaptation, and should be a treat for anybody who grew up watching the TV airing. For new fans of the series it might not work so well, since the 13 episodes finish up partway through the fight with main villain Vegeta, prompting a necessary purchase of Part 2 for interested viewers. Actually, newcomers might even be better served by picking up volumes 1 through 4 of Viz's release of the Dragon Ball Z manga, which cover the entire Vegeta fight and can be purchased for well under the price tag of DBZ Kai Part 1.

Still, as a lifelong fan of Dragon Ball Z, I can confidently say that, if given the choice, this is absolutely THE release of the Dragon Ball Z anime that I would purchase. With Dragon Ball Z Kai, you don't just get 13 episodes of Dragon Ball Z, but you get 13 legitimately good episodes. It's a wonderful chance to experience the best that DBZ has to offer and a chance that no true fan of the show should pass up.


This review is based on a review copy of the DVD box set, provided to the reviewer by FUNimation Entertainment.