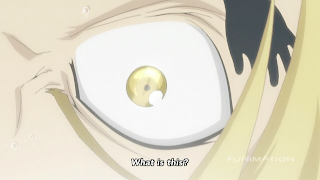 Continuing its course of having humans finish off the Fuhrer, FMA2 has Lan Fan save Greed-Ling from falling and a random Briggs soldier deliver a shot that causes Bradley to fall into a moat below. Of course the Fuhrer floats away to fight another day, but analysis-wise I’m happy to see random soldiers stealing alchemists’ proverbial thunder. The action and identifiable anonymity of supporting cast is precisely why FMA2 has succeeded in returning the FMA series to the shonen spirit in which the manga was supposedly originally written. If I may generalize, most young boys identify easily with action heroes. Vengeance is a simple concept for humanity, and the more character types you have involved in gun fights and sword battles, the more types of young male readers will identify and keep buying your volumes or watching your episodes.

This runs contrary to FMA1, which more decidedly relies upon feelings of regret and loss – themes not as engaging or identifiable to a younger audience, especially younger males (if I may again generalize). This explains the high percentage of younger girls and older otaku of both genders interested in FMA1’s vastly different tone of redemptive and compassion-driven introspection.

The tone for both series greatly affects scenes involving death. In FMA1, very few main heroes die, namely Hughes. Scar and Greed, who start out as villains, can also be considered fallen heroes, but all other deaths are dealt to homunculi, for most of whom FMA1 evokes sympathy due to their human traits. However, deceptive deaths, such as those of Mustang, Ed, and Al, carry great weight due to the careful (if heavy-handed) layering of character. This contrasts deaths in FMA2, those of supporting characters Buccaneer and Fu specifically, because they die a soldier’s death as witnessed by comrades in arms, a possibility they face every day and are hardened towards. This leaves feelings of respect for having carried out their duty and gratefulness for how they served. There is only a small emotional hole allowed for grief in battle, and that is what FMA2 does best, realistically (at least moreso than FMA1) depicting a war-like environment. This also explains the brief lament and subsequent rage into which Greed-Ling flies over Fu’s death.

Continuing the brave evolution of ancillary characters, Falman gets an expanded role as resistance troop commander at the main gate, or rather he starts to become more comfortable giving orders instead of just taking them. Evolution is not something FMA ever let supporting characters be privy to. They either provided comic relief or emotional support, but always at a static distance.

Something else I found to be an interesting difference between series is that Hawkeye is mortally wounded and it is up to Mustang to save her in FMA2, whereas Mustang was mortally wounded and it was up to Hawkeye to save him in FMA1. Going back to what I said earlier about desired audiences, FMA1 plays to sympathetic sensibilities evoked by a strong female character – something I think would elicit identification more directly from females and compassionate/sympathetic older males than younger males – while FMA2 reverts to the classic man rescues girl. Although Hawkeye is still a strong female character in FMA2 (much moreso than in FMA1), she’s made into the damsel in distress for male viewers to want to be saved by their fire-wielding proxy. Her devotion to him and his straightedge path to the Fuhrer’s throne is what makes the defeat of Mustang’s resolve to not use human alchemy so painful, while it is the unspoken love and support built over 52 or so episodes that makes the sight of his bloody body so identifiably tragic to a delayed Hawkeye in FMA1.