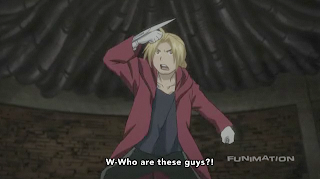 I love being led astray. Wrath doesn’t die (yet), but his ego suffers a great wound when Fu’s assault leads to the penetration of the master swordsman’s defenses and subsequent run through. While I said my piece about the implications of having the humans be the ones who draw first blood from Wrath in the previous diary, there is something worth noting via Buccaneer’s surprise involvement: resilience. Humanity’s stubborn nature, as admitted by the homunculi, has been a thorn in their collective sides. This persistence is now personified in battle via Buccaneer continuing to fight despite suffering incurred from mounting mortal wounds, whereas previously this series only showcased (OK, FMAFAN, I’ll finally say it) emotional aspects of determination.

Regarding the battles therein, FMA1 is never so cleverly indirect in execution. Usually fights consist of metaphorically mano-a-mano battles where the hero faces the villain(s). The only comparable situation is Ed’s fight with Sloth, when he is unsuspectingly aided by Wrath’s mommy complex which ends up paralyzing the reincarnation of Ed’s mother for long enough to enable the final alchemic blow. Both series, however, use the surprise attack exactly according to their strengths. FMA2 has Fu’s proximity to Wrath blind the homunculus’ periphery long enough for Buccaneer to sneak a sword through Bradley’s chest in a brilliantly sacrificial (if only misguided) tactical move, while FMA1 uses overly strong (and equally misguided) familial attachments to bring about the downfall of a loved one.

Failure pertaining to choice and application of incidental background music continues to dog FMA2. When Izumi and Olivier are discussing sacrifices and feelings of longing for the dead, there’s what sounds like a light violin bouncing behind the scene. While the music does offer a stark contrast to what happens next, it is totally inappropriate for the conversation at hand and detracts from the overall tone. Once again, as with Pride’s face-off with Al in an earlier episode, the writing can more than carry the scene, showing FMA2 does not quite know when silence is more appropriate than superfluous noise. FMA1’s music always seems appropriately chosen and implemented, which can be chalked up to the fact that the abundant emotionally dramatic scenes laced throughout are easier to put music to than reflective, intense discussions.

As per the “WTF” moment in this episode, the sacrifice of our favorite taboo-committing alchemists, all I can say is that FMA2 wields human transmutation as a homunculus weapon and means to self-induced physical harm for humans as opposed to FMA1’s self-destructive faux pas that inspires lifelong penitence. Sure, both series use alchemy to level cities as well as sacrifice all the souls within them, but what matters is who uses the taboo and for what purpose.

FMA2 has Dwarf-In-A-Flask manipulate Hohenheim into sacrificing everyone in Xerxes via alchemy to gain immortality and now uses the gold-toothed doctor, creator of Wrath, to sacrifice Ed, Al, and Izumi. While the purpose of the latter is not known as of yet, what is identifiable is that FMA1 never launched an alchemic sacrifice against others. In FMA1, it was always an act of self-sacrifice that led to personal harm. Not to say FMA1 didn’t attempt it via the homunculi plan to sacrifice Al’s body and consciousness in order to turn him into a “true Philosopher’s Stone,” but the plan’s offensive was thwarted by Al’s emotionally driven self-sacrifice to return his dead brother to life. In FMA2, there is no counter to this evil execution of transmutation.