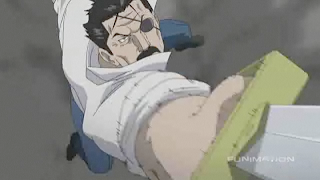 Watch Episode 56 – The Return of the Fuhrer

The value of human souls is once again emphasized in FMA2 via Hohenheim’s “conversations” with those sacrificed for the sake of his own immortality. The closest FMA1 came to this was having Ed break down in Hamlet-esque indecision over whether or not to use those souls sacrificed for the stone to help his brother and himself, or Al’s final sacrifice in the series (excluding Shambala). But FMA2 personifies those lives sacrificed to make the Xerxes Philosopher’s Stone via little scenes from ordinary life and explanations thereof through the recollections of Hohenheim. But for all of the personalization employed by FMA2, the impact is less personally emotional, as in FMA1, than it is supportive of a sense of coalition. Obviously, this suits FMA2 better, as overly sentimental outbursts are not part of its repertoire.

Re-enter Fuhrer Bradley ... with a vengeance. One should expect nothing short of a full-on assault from a homunculus named Wrath, and the details in his storming Central HQ are just as important as its execution is impressive. Cutting to the quick, the first thing to notice is the slicing of a tank cannon shell in twain and the pieces of which subsequently take out 3 different, Fuhrer-loyal, Central soldiers. This is important to notice, as compared to Mustang’s merciful (up until now death-free) coup, because the advance shows blatant disregard for human life by killing friend and foe with the same blade.

Speaking of swordplay, another big inter-series difference is this very showcasing of Bradley’s bad-ass blade. While already featured in previous episodes against Greed, the importance here is timing. If I’m correct in assuming this will be Bradley’s last fight, then a comparison with the same in FMA1 is in order. First off, FMA1 only allowed Bradley to show off his specialty in his fatal battle with Mustang. Aside from some really well animated thrusts, however, the swordsmanship was only cursory, and the most impressive animation was the personal injury done to Mustang. Mostly, FMA1 uses the swiftness of the wielding itself to disrupt airflow and counter Mustang’s alchemy ... and the Flame Alchemist is helpless against it until Selim accidentally causes his father’s downfall. This exemplifies the monsters vs. alchemy theme, which is a steady difference from FMA2. On the other hand there is a similarity between series when Selim betrays his father. Humanity vs. monsters is a steady theme in FMA2, and FMA1’s Selim does indeed enable the killing of Bradley via Mustang’s alchemy. However, true to FMA1, the betrayal is accidental and done out of love — not political reasoning as in FMA2.

Bradley’s slashing skills in FMA2 are already well defined, and now we get to see wrath personified as the Fuhrer slices and dices his way with ease to the front gate. At the front gate, after dispatching with the regular humans with utter effortlessness, there comes another Greed/Wrath battle. The fact that Wrath has such an upper hand against Greed makes the execution of this battle disappointing compared to others betwixt the two, who strategically serve as foils for each other. However, what follows makes the same battle fantastic in terms of analysis: Fu arrives to once again serve as Ling-Greed’s bodyguard. In the few seconds Fu counters Bradley, he seems to have more of an edge in fighting him than did Greed. Cheating a bit by including assumptions based on next week’s preview, I’ll venture a guess that, in line with contrasting FMA1, FMA2 will have Fu finish off Bradley (possibly with help from Greed), furthering the series’ human vs. homunculus theme.